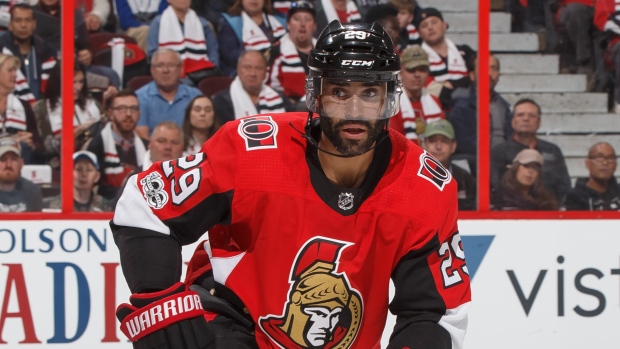 The Calgary Flames have claimed forward Chris Stewart on waivers from the Minnesota Wild, while the Philadelphia Flyers claimed defenceman Johnny Oduya from the Ottawa Senators.

The Flyers also lost defenceman Mark Alt to the Colorado Avalanche after waiving him on Sunday.

Stewart, 30, was waived Sunday after posting nine goals and 13 points in 47 games with the Wild this season. He scored 13 goals and had 21 points in 79 games last season.

Oduya was held out of the team's game Saturday with potential trade interest in the 36-year-old. He has four goals and four assists in 51 games for the Sens this season.

Burrows has three goals and five assists in 51 games for Ottawa. He has one game remaining in his 10-game suspension for kneeing New Jersey's Taylor Hall earlier this month.

O'Brien has spent the season in the AHL, posting 13 goals and 28 points in 55 games with the Belleville Senators.

Alt, 26, has no points while appearing in eight games with the Flyers this season.