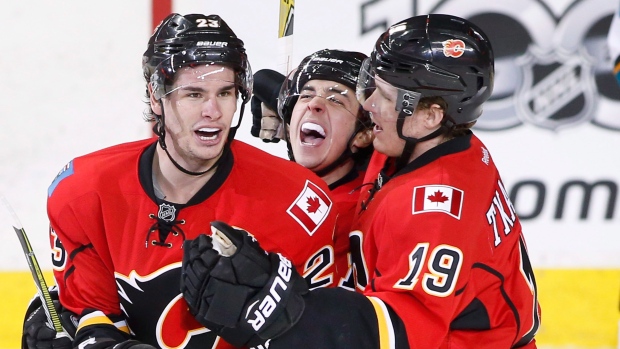 CALGARY — On the back of another masterful performance from Brian Elliott, Calgary has clinched a playoff spot.

Elliott made 36 saves and Matt Stajan's first goal in 24 games was the eventual winner as the Flames won 5-2 on Friday night against the slumping San Jose Sharks.

"He was fantastic. He was the reason we got these two points tonight," said Calgary coach Glen Gulutzan.

Acquired from the Blues in June, Elliott struggled to begin the year but has been on a roll lately winning 14 of his last 16 starts.

He was especially sharp in a sloppy first period for the home team as Calgary was charged with nine giveaways, was outshot 12-7, was shorthanded twice, yet still emerged with a 1-0 lead.

"Ever since I came here, (playoffs) was the goal," said the 31-year-old. "I was fortunate enough in St. Louis to be there five years in a row. I know how fun, how meaningful and how much it brings to the city to be in the playoffs. This is a big accomplishment."

With the boisterous sell-out crowd of 19,289 already on their feet in a standing ovation, Sam Bennett sent the fans and the players into a frenzy with an empty-net goal to complete the scoring.

"When Bennie came out of the box and got the empty netter, I watched all the guys stand up and start hugging each other when it went in," said Gulutzan. "Special moment there, the guys were truly excited."

It's just the second trip to the playoffs in eight seasons for Calgary. After going two rounds in 2015 under coach Bob Hartley, the Flames had a disappointing season last year and finished 26th overall. Hartley was fired after the season and replaced by Gulutzan.

Things didn't start off very well for Gulutzan as Calgary was 5-10-1 in mid-November and had the NHL's worst winning percentage. But since that point, they've been one of the league's best teams.

"Those guys, they pushed themselves there," said the coach. "I've never been more proud of a group. From the adversity that we had early on and just sticking with it. In my 17, 18 years coaching, just a fantastic group of guys and very proud of what they've accomplished."

Johnny Gaudreau, Sean Monahan and Alex Chiasson also scored for Calgary (44-30-4), which has won three out of the four meetings this season between the two teams.

The victory pulls the Flames to within one point of the third-place Sharks in the Pacific Division. Each has four games remaining including a showdown with each other at the SAP Center on the final night of the season.

Marc-Edouard Vlasic and Melker Karlsson scored for San Jose (43-28-7), which has lost eight of its last nine. Next up for the slumping Sharks is a back-to-back set with the Vancouver Canucks.

"A lot of us are getting chances. We're not going out there with our sticks upside down and not working and packing it in. That's not the case here," said Sharks defenceman Brent Burns. "We've just got to try to stay positive, work through it and help each other."

Martin Jones stopped 18-of-22 shots through two periods before getting replaced by Aaron Dell to start the third. Jones has lost five of his last six starts and has an .856 save percentage over that span.

Notes: This is just the second time in the last 25 years both Calgary and Edmonton have made the playoffs in the same season. The other year was 2006-07, the Oilers last appearance in the post-season... Sharks scratches included forwards Joel Ward and Joonas Donskoi, who were replaced upfront by Marcus Sorensen and Labanc.