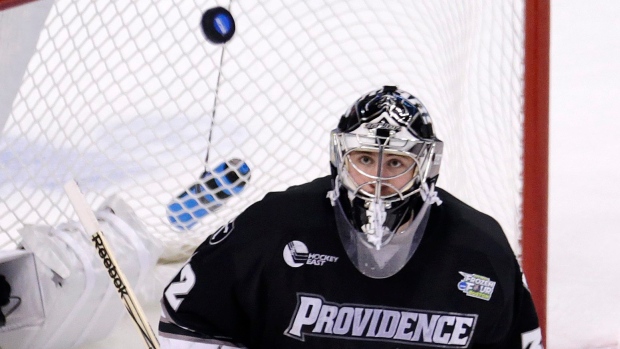 Calgary drafted Gillies 75th overall in the third round of the 2012 NHL entry draft.

Gillies, 21, made 49 saves for Providence in a 4-3 win over Boston University on Saturday to cap his college career with an NCAA championship.

The six-foot-six, 225-pound goalie from South Portland, Maine, was named the most valuable player of the Frozen Four tournament.

Gillies joined the Flames for a pre-game skate in Vancouver on Wednesday prior to Game 1 of their first-round playoff series against the Canucks.

He posted a goals-against average of 2.01 and a save percentage of .930 in 38 games for Providence College this past season.

Note to readers: This is a corrected story. A previous version incorrectly stated the Frozen Four title game was Sunday.