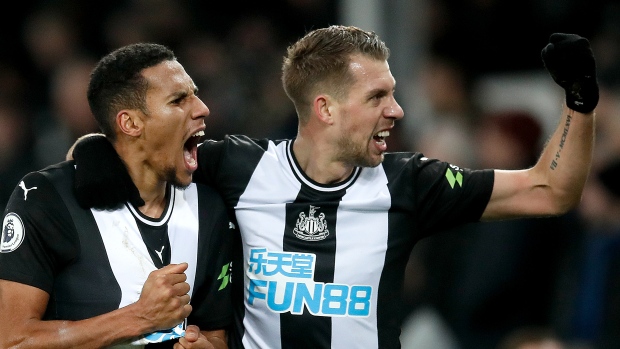 LIVERPOOL, England — Florian Lejeune scored two injury-time goals to rescue an unlikely point for Newcastle in a 2-2 draw at Everton in the Premier League on Tuesday.

The second-half substitute took advantage of poor defending by Everton to flick home an overhead kick in the fourth minute of stoppage time and then scramble in an equalizer a minute later at Goodison Park.

Everton looked to be cruising to victory after goals by strikers Moise Kean - his first for the club since his off-season move from Juventus - and Dominic Calvert-Lewin.

Newcastle had only had one shot on target before Lejeune's late intervention.

It ruined what should have been Kean's night after the Italy striker finally produced the performance Everton had been waiting for.

Barely a month ago, Kean was taken off by caretaker manager Duncan Ferguson just 18 minutes after coming on as a second-half substitute at Manchester United in the lowest point of his short time in England.

The 19-year-old striker has been given a chance to impress by new manager and compatriot Carlo Ancelotti, and marked his first back-to-back Premier League starts with a goal in his 22nd appearance.

Everton's fans had witnessed little of the potential which saw Kean score in four successive appearances last April for the Serie A champions but the teenager might be showing signs of adapting after six months in English football.

His 30th-minute goal was doubled by Calvert-Lewin, who became the first Everton player into double figures in the league this season with a neat second-half finish.

Everton and Newcastle both have 30 points and are stuck in midtable.