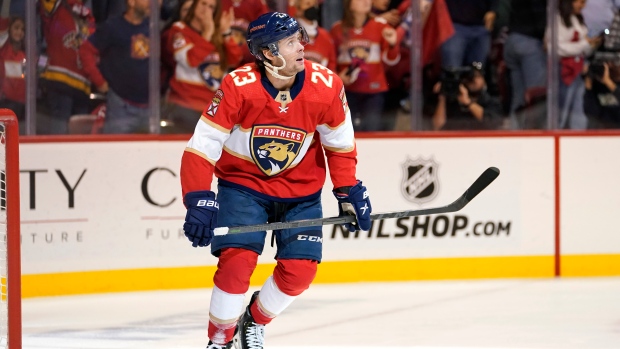 In the midst of a breakout playoff campaign, Florida Panthers forward Carter Verhaeghe is a game-time decision for Game 2 of their second-round Eastern Conference series against the Tampa Bay Lightning on Thursday.

Panthers interim head coach Andrew Brunette did not elaborate on what was ailing the 26-year-old Waterdown, Ont. native.

“It’s just bumps and bruises of a playoff series,” Brunette said after a morning skate in which Verhaeghe exited early.

A Stanley Cup winner with the Lightning in 2020, Verhaeghe appeared in 78 regular season games for the Panthers this past season, scoring 24 goals and adding 31 assists.

Through seven playoff games this season, Verhaeghe has six goals and six assists.

The Lightning lead the best-of-seven series 1-0 on the back of Tuesday's 4-1 win.