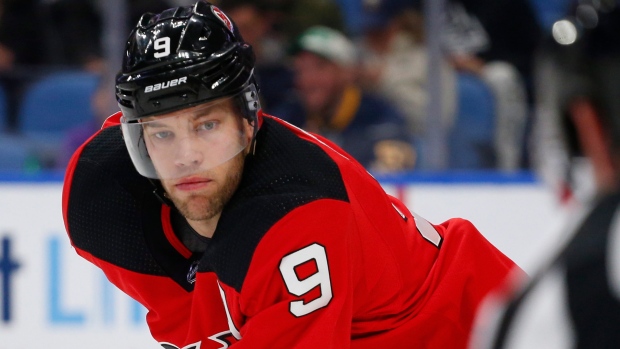 The Florida Panthers have inquired about New Jersey Devils forward Taylor Hall and are among 5 to 6 teams that are in the mix to land the former Hart Trophy winner, according to TSN Hockey Insider Pierre LeBrun.

Hall is out of the lineup tonight against the Arizona Coyotes, a night after being scratched against Colorado.

The Coyotes and Colorado Avalanche are two of the teams that are also involved, according to LeBrun.

Hearing that the Florida Panthers have inquired on Taylor Hall. About 5-6 teams in the mix including Arizona and Colorado among others...

Trade rumours intensified on Friday when the Devils scratched Hall from the lineup ahead of their game against the Avalanche for what the team called precautionary reasons.

Hall has six goals and 25 points in 30 games with the Devils this season and is the subject of increasing trade speculation. He was limited to 33 games last season due to a knee injury, posting 11 goals and 37 points.

The 28-year-old won the Hart Trophy in 2018 after scoring a career-high 39 goals and posting 93 points in 76 games to lead the Devils to a playoff berth. He posted 41 points more than the team’s next leading scorer that season.

A pending unrestricted free agent, Hall carries a $6 million cap hit in the final season of a seven-year deal signed with the Edmonton Oilers in 2012.

The Avalanche beat the Devils 3-1 on Friday night, dropping New Jersey's record to 9-17-5.