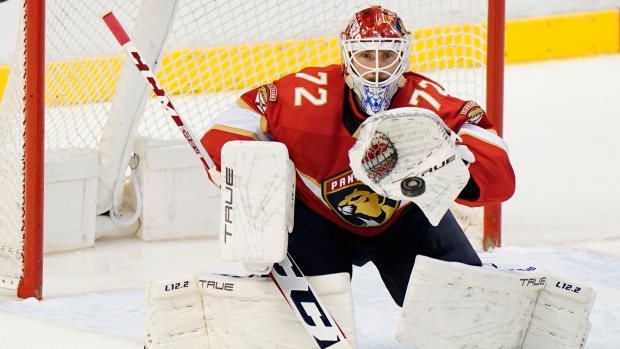 The Florida Panthers have secured their playoff spot and are closing in on locking up first in the Atlantic Division but despite their strong season, questions remain about the team's goaltending.

TSN Hockey Insider Pierre LeBrun said Tuesday on Insider Trading that the team is hoping to start Sergei Bobrovsky in the playoffs but could turn to Spencer Knight if the veteran continues to struggle.

"Listen, it’s certainly the plan at this point that they want him to be the starter, but Sergei Bobrovsky has to find his game here," LeBrun said. "The Panthers have a lot of confidence in Spencer Knight and usually a team that has this kind of lead atop their division, these games are kinda the dog days of the season. Boy, they sure aren’t for Sergei Bobrovsky, he’s gotta get his game back on, he’s been pulled the last couple times and listen if the Panthers aren’t comfortable with where he’s at come playoff time, they are comfortable starting Spencer Knight.

"All things being equal, they hope Bobrovsky gets back on track, he starts the playoffs, and then they know they can go to Spencer Knight if need be."

After being pulled in two straight games to open the month of April and posting a .864 save percentage in his previous most recent start on April 8, Bobrovsky bounced back Tuesday, making 22 saves on 24 shots in a 3-2 overtime win over the Anaheim Ducks. The 33-year-old has a 35-6-3 record this season with a .911 save percentage and a 2.70 goals-against average.

The Panthers used three goaltenders in their first-round series against the Tampa Bay Lightning last year, with Bobrovsky, Knight and now-Seattle Kraken Chris Driedger all seeing two starts in the six-game series loss.