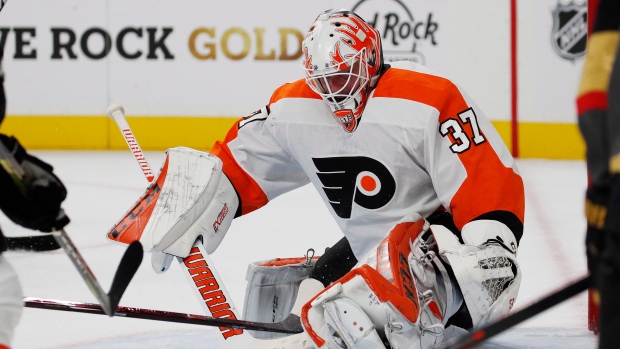 Count Brian Elliott of the Philadelphia Flyers among the goaltenders unhappy with the NHL's move to smaller chest protectors.

The 33-year-old told The Philadelphia Courier-Post on Monday that through two games, he's already feeling negative effects from the downsize in pads.

“I’ve already sent a couple emails to (NHL vice-president of hockey operations) Kay Whitmore. I’m getting bruised like crazy on my arms," Elliott said. "I think that’s the biggest issue, they take away padding in the arms. It seems like every shot that you take that’s not clean on your blocker or in your glove, it’s leaving a mark.”

The league put a focus this off-season on having chest protectors become less boxy and more form-fitting in the shoulders and along the arms. Whitmore said the league wanted to ensure that smaller goaltenders were not wearing the same size pads as larger netminders.

"Three or four years ago, talking to some of the best goalies in hockey...they wanted us to try to find a way to make goalies look closer to the size they were," Whitmore told The Canadian Press last month. "The biggest complaint was, 'If I weigh 50 pounds more than another guy, why do we look the same?'"

He noted there could be a need to adjust the pads moving forward, since no goaltender should endure what Elliott has so far this season.

"There's no expectation that a goalie should have to do his job getting bruised daily," Whitmore explained. "We're having to work through some deficiencies from a manufacturing side.

"I don't want to see guys go on the ice fearful of getting hit with pucks, because that's what they do for a living."

The move to reduce the size of chest protectors follows last season's focus on form-fitting goalie pants as the league looks to increase scoring. The downsize hasn't helped Elliott, who's off to a 1-1 start with an .898 save percentage - down from his career .913 mark.

“It’s just straight shots to your arms and I don’t agree with it.”