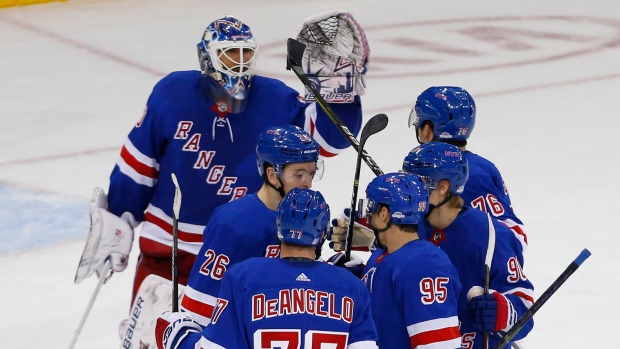 TORONTO — The New York Rangers are the NHL's most valuable franchise for a fourth consecutive year, according to the latest estimate by Forbes.

The Rangers top the annual list of franchise valuations at US$1.55 billion, up three per cent over last year.

The Toronto Maple Leafs are second at $1.35 billion and Montreal Canadiens third at $1.3 billion, a four-per-cent increase for both clubs.

Original Six clubs make up the top five of the list, with the Chicago Blackhawks fourth at $1.05 billion and the Boston Bruins fifth at $925 million. The Detroit Red Wings are not far behind their Original Six cousins in eighth ($775 million) and have seen an 11-per-cent increase in value thanks to a new downtown arena.

Los Angeles (sixth, $810 million), Philadelphia (seventh, $800 million), Vancouver (ninth, $735 million) and Washington (10th, $725 million) round out the top 10. The Capitals enjoyed a league-best 16-per-cent boost in valuation over last year thanks to a run to its first ever Stanley Cup title.

The Vegas Golden Knights had a 15-per-cent boost in value to $575 million, good for 12th in the league, after becoming the first expansion team to advance to the Cup final.

At the other end of the list are the Florida Panthers (30th, $295 million) and Arizona Coyotes (31st, $290 million). The clubs were the only two to lose value according to Forbes, down three per cent each.

According to the list, the value of the average NHL team rose six per cent during the past year, to a record $630 million.

The release of the list comes on the heels of the NHL approving a 32nd team in Seattle for a hefty expansion fee of $650 million.