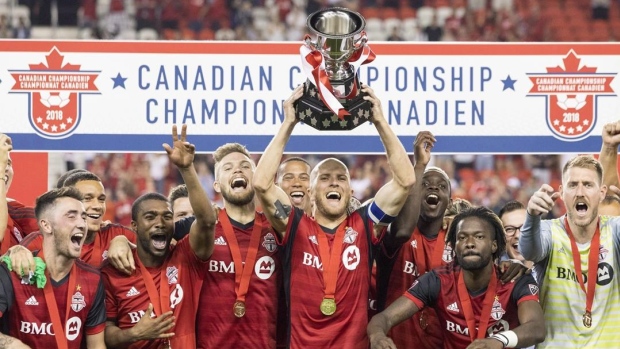 While an exact date for the Canadian Championship final between Toronto FC and Forge FC has yet to be determined, the teams now have a deadline to meet for the matchup.

CONCACAF confirmed Friday that the opening round of 16 for the 2021 edition of the Scotiabank CONCACAF Champions League will go April 6 to 8. With the Canadian Championship winner advancing to CONCACAF's flagship club competition, Toronto and Forge will have to play before that April window.

The tournament draw is scheduled for Feb. 10 in Miami. It's believed to be unlikely the Canadian showdown will take place before the draw.

The 2020 Canadian Championship originally was to have featured 11 clubs — the three Canadian teams from Major League Soccer and eight Canadian Premier League sides. The tournament was slated to kick off June 16 and run through Sept. 23, but was delayed when soccer suspended play due to global pandemic.

In August, Canada Soccer decided to scrap the tournament and just stage a one-off final with the first quarter of 2021 eventually targeted for timing.

Hamilton-based Forge qualified for the final by winning the CPL's Island Games in Charlottetown last summer. Toronto made it by finishing first among the Canadian teams in the first phase of the revised MLS 2020 schedule.

The Canadian Championship was first held in 2008. Toronto FC has lifted the Voyageurs Cup seven times compared to four for CF Montreal, formerly the Montreal Impact, and once for the Vancouver Whitecaps.

Forge FC took part in the CONCACAF League but failed to advance via that route.

The CONCACAF Champions League normally starts in mid-February. CONCACAF, which covers North and Central America and the Caribbean, said it has been pushed back to April due to scheduling and travel challenges associated with the pandemic. CONCACAF says the host for the single-leg Champions League final will be the highest-performing club in the earlier rounds of the tournament, based on wins, draws and, if required, goal difference.

This report by The Canadian Press was first published Jan. 22, 2021