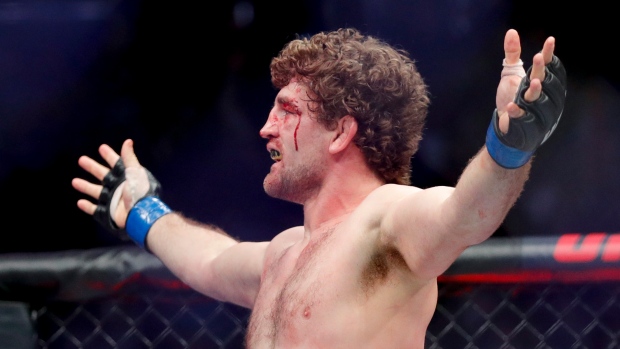 Ben Askren is hanging up his gloves.

The 35-year-old welterweight announced his retirement on Monday as a guest on Ariel Helwani's MMA Show on ESPN.

"I'm retired from the sport of mixed martial arts and frankly, I'm retired from everything."@Benaskren cites needing a hip replacement as a factor in his retirement (via @arielhelwani) pic.twitter.com/OZLG2ZDTBj

The announcement comes on the heels of the Cedar Rapids, IA native's submission loss to Demian Maia in the main event of October's UFC Fight Night in Singapore.

The former ONE and Bellator champion cited severe hip issues as the impetus for the decision.

"I'd been having hip problems and I finally had the discussion with my doctor and - I actually got the MRI back before my last fight - I need a hip replacement," Askren told Helwani. "So, man, that's it for me. I've been thinking about this for a week and what I was going to say and, really, I've just been filled with gratitude over the career I've been able to have, even though obviously, in the end, it didn't turn out my way."

A collegiate wrestler out of Mizzou, Askren finished his college career with a 153-8 record, with 91 of his wins coming from pins, fourth-most all-time in NCAA history.

After representing the United States at the 2008 Beijing Olympics, Askren turned pro in 2008 and joined Bellator the following year. In his fourth fight with the promotion, he defeated Lyman Good by unanimous decision to win the welterweight title. Askren would successfully defend the title on four occasions, including wins over Douglas Lima and Jay Hieron, before vacating the title and leaving the promotion for ONE.

In 2014, Askren defeated Nobutatsu Suzuki by first-round TKO to claim the ONE welterweight crown. Askren would defend that belt on four occasions before vacating it to join the Ultimate Fighting Championship in a rare promotion-to-promotion fighter trade that saw Demetrious "Mighty Mouse" Johnson go the other way.

Askren, at one time considered the best fighter outside of the UFC, made his Octagon debut at UFC 235 in March of 2019, defeating former welterweight champion Robbie Lawler with a bulldog choke in the first round. It would turn out to be Askren's only win in the promotion.

At UFC 239 this past July, Askren fell victim to Jorge Masvidal's now infamous flying knee only five seconds into their bout for one of the most spectacular knockouts in UFC history.