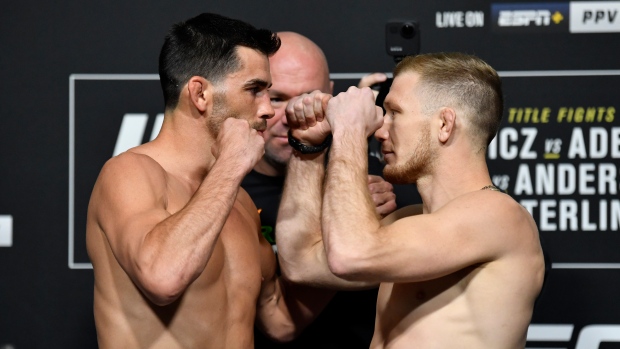 On a star-studded night in Las Vegas, three title fights will headline UFC 259 as four champions compete on Saturday’s card at the UFC Apex.

In the main event, light heavyweight champion Jan Blachowicz will make his first title defence against middleweight champion Israel Adesanya. In the co-main event, two-division champion Amanda Nunes puts the featherweight belt on the line against Megan Anderson. The third title fight on the card will see Petr Yan also make the first defence of his bantamweight crown as he faces Aljamain Sterling.

The prelims are also stacked with star power.

In the featured bout, former two-time bantamweight champion Dominick Cruz returns to the Octagon for the first time since last May to face Casey Kenney.

The former title holder lost to then-champion Henry Cejudo via second round TKO at UFC 249. Cejudo vacated the belt and retired following that victory.

Cruz’s loss to Cejudo came after three-and-a-half years away from action for various injuries after losing the bantamweight title to Cody Garbrandt at UFC 207.

Prior to those two losses, the 35-year-old was riding a 13-fight winning streak, including both title victories. He was forced to vacate the bantamweight belt in 2014 during an earlier spate of injuries.

After contesting for or defending the belt in his last four fights, Cruz faces Kenney, an unranked 29-year-old fighter trying to break into the upper echelon of the division.

Cruz says his position both as a commentator and former champion gives him perspective on his opponent and he will not be taking the unranked fighter lightly.

“When you’re an analyst the way I am, you know that anybody in the top-15 is within a year of being a champion,” Cruz told TSN. “Three fights, three or four fight tops is all you need to do to win, he’s already on a three-fight winning streak. If he wins three more fights in the next year, he’s in title contention. As somebody that’s been through the line and done what I’ve done, at one point in this sport I cleaned out the division, I’ve faced guys that were ranked 15 and within a year they’re ranked No. 2. There is no added motivation towards what the world sees these fighters as, because I know what each one of them is.”

The Portland, Indiana, native has won five of his six fights since joining the promotion, with his only loss coming at the hands of Merab Dvalishvili last February.

Benavidez is coming off back-to-back losses to Deiveson Figueiredo in vacant flyweight title fights. Figueiredo was ineligible to claim the title after the first bout due to missing weight.

The 36-year-old also dropped two championship bouts to Demetrious Johnson, including for the inaugural title at UFC 152 in Toronto.

Before his two most recent title fight losses, Benavidez had put together a three-fight winning streak with victories over Alex Perez, Dustin Ortiz and Jussier Formiga.

Heading into Saturday’s bout, the No. 2-ranked veteran of 17 UFC fights says his mind is only on his opponent and not on how many more times he’ll make the walk in his career.

“I really haven’t thought about that, just looking at the fight in front of me and it’s always to me about fighting the best and trying to be the best,” Benavidez told TSN. “Being the absolute best, I’ve fallen short of that, but that’s why this fight was so intriguing that I’m still getting to fight guys at the top like Askar Askarov.”

Askarov, the No. 3-ranked bantamweight, is an undefeated 12-0-1 in his professional MMA career.

The 28-year-old defeated Alexandre Pantoja via unanimous decision in his last outing in July of 2020.

He earned his first win in the UFC over Tim Elliott at UFC 246 after earning a draw in his promotional debut against Brandon Moreno.

Song Yadong, who has not suffered a defeat since 2016, will battle Kyler Phillips and Rogerio Bontorin will kick off the prelims on TSN against Kai Kara-France.