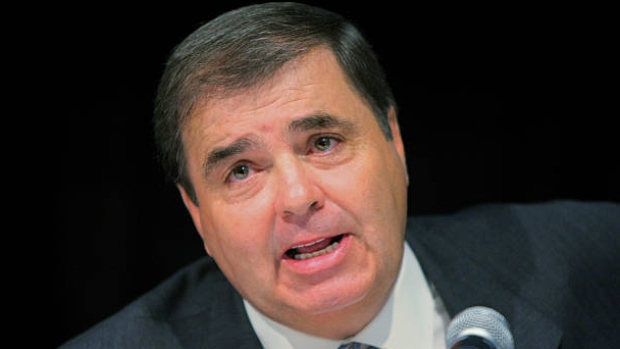 Pierre Lacroix, the former general manager of the Quebec Nordiques and Colorado Avalanche, has died at the age of 72.

The Avalanche confirmed his death in a statement Sunday.

"Pierre was instrumental in not only the team's on-ice success but also building the Avalanche brand into what it is today," the club said. "His legacy reaches far beyond the NHL level and his impact can be felt throughout all of youth hockey in the Rocky Mountain region."

Lacroix started his career as a player agent before being hired as the Nordiques GM in 1994. He stuck with the team when it moved to Colorado for the 1995-96 season and orchestrated several big trades that helped build the Avalanche into a top contender.

When his former client Patrick Roy wanted out of Montreal, Lacroix constructed a trade to bring him to Denver. The star goalie backstopped the Avs to Stanley Cups in 1996 and 2001.

Lacroix added defenceman Ray Bourque to Colorado's lineup in a trade with the Boston Bruins in 2000 and brought in Rob Blake from L.A. the following year.

“Pierre Lacroix's eye for talent, appreciation for elite-level athletes and fearlessness in pulling off the big trade made him one of the most successful team builders in recent NHL history," NHL commissioner Gary Bettman said in a statement. "Fiercely competitive and personally engaging, he was highly regarded by his fellow general managers and his voice was respected throughout the league."

Joe Sakic had a unique bond with Lacroix, having played for him in both Nordiques and Avs uniforms.

“Pierre is someone I trusted very much right from the first time I met him. I’ll always remember him as not only a great GM but an even better person," Sakic, Colorado's current general manager and executive vice president, said in a statement.

"He always treated everyone like family and he wanted us players to have that same mentality. He was a great example to all of us. Pierre was a mentor to me and someone I learned a lot about the business of hockey from.”

Lacroix stepped down as the Avs GM in 2006, opting to become the team's president. He held the role until 2013 and later served as an adviser for the club.

He was inducted into the Colorado Sports Hall of Fame in 2008, recognizing both his work on the ice and in the community.

Lacroix's impact was felt further north, too. The Montreal Canadiens issued condolences to his family Sunday, saying "his contributions extend beyond our sport."

"Pierre was a man admired and respected by all," the Canadiens said in a post on Twitter. "He was a great builder who left his mark on Quebec hockey."

Lacroix is survived by his wife, Colombe, his sons Martin and Eric, and his three grandchildren.

This report by The Canadian Press was first published Dec. 13, 2020.