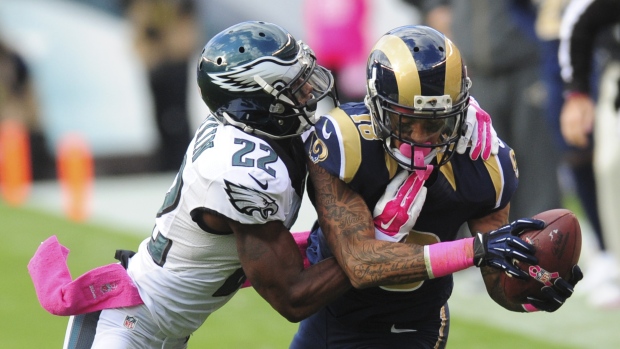 Boykin, who enters his fourth season, also wanted to clarify his comments on Sunday, a day after the Eagles traded him to the Steelers for a conditional fifth-round pick, stressing that his former head coach Chip Kelly is not a racist.

"I said he was uncomfortable with men of our culture," Boykin said. "I'm not saying he's a racist at all. That's not what I said and I think it was kind of taken out of context. When you're a player, you want to be able to relate to your coach no matter what outside of football.

"I want to be able to sit there and talk to you about whatever. There were times he just wouldn't talk to people. You were walking down the hallway and he wouldn't say anything to you."

It's not the first time Kelly has faced similar accusations as star running back LeSean McCoy spoke out after he was traded from Philadelphia to Buffalo in March.

"I'm not saying he's a racist in any way," Boykin said. "I'm just saying, as a player, I want to be able to relate to my coach a little better and I felt like a lot of guys in the locker room feel the same way.

"Of course, when you're in the organization, you're not going to voice your opinion, but I've always been a guy of honesty. I felt like honesty wasn't there all the time."

Now, he has a chance to start over with the Steelers, who spent the off-season revamping a secondary that lost veterans Troy Polamalu and Ike Taylor to retirement in addition to Brice McCain via free agency.

The Steelers, who also used draft picks on three defensive backs, seek to improve a group that finished 25th in the league in interceptions. It's an area where Boykin could immediately contribute, as he slides into a group headed by Cortez Allen, William Gay and Antwon Blake.

Boykin has seven career interceptions, six of those coming in 2013, which tied for second in the league.

"The expectations are to come in and just play," Boykin said. "They got me because they know that I can make plays and they feel like I can help, so that's exactly what I'm going to do."

Boykin, the subject of trade rumours throughout the off-season, was considered one of the top slot cornerbacks, but he wanted an opportunity on the outside.

"I would say that I was eager to get on the field as much as I could," said Boykin, who enters the final season of his rookie contract. "I was never frustrated. I was confident in myself because I know what I can do and I know my ability."

The Eagles finished 31st in yards passing allowed per game — four spots ahead of Pittsburgh — with Cary Williams and Bradley Fletcher on the outside. Williams was released to save salary cap space and Fletcher left in free agency, but the Eagles signed Byron Maxwell to a six-year $63 million free agent contract and used three draft picks on defensive backs, eventually signalling the end for Boykin.

He doesn't hold any hard feelings against Kelly or the Eagles though.

"(Kelly) gave me an opportunity to play," Boykin said. "Whether I wanted to start or not, that was out of my control, but I did play and got to show what I could do.

"This is my own personal experience and I can't speak for any other player. I respect him as a person, but as a player, we didn't have that connection."