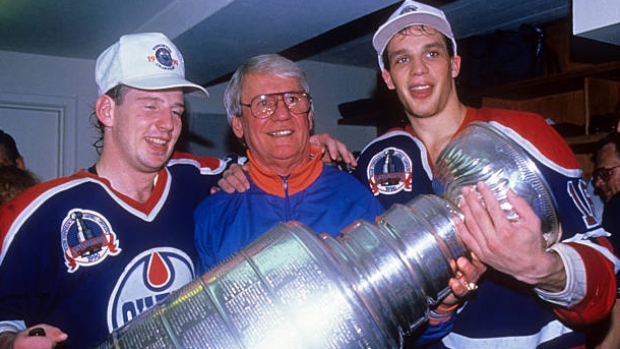 Muckler joined the Oilers organization as an assistant coach in 1981 following two decades at various positions with the Vancouver Canucks and the New York Rangers, as well as a head coaching stint with the Minnesota North Stars in 1968-69.

He won his first Stanley Cup in 1984 as an assistant coach on the Oilers' staff and another in 1985. He was promoted to assistant head coach under Glen Sather. After two more Cup wins with the club in 1987 and 1988, Muckler was named head coach in 1989 and led the club to its fifth NHL title in seven years in 1990.

"On behalf of the Edmonton Oilers organization and John's many friends in the game of hockey, I want to extend my heartfelt condolences to Audrey and the entire Muckler family," said Wayne Gretzky in a statement. "When you have 22 pretty good hockey players and have enjoyed some success it's hard imagine that the addition of an Associate Coach would be the final piece to getting the Edmonton Oilers to the top of the mountain, but that's exactly what happened when John joined the team.

He was tough, strict, but most importantly fair, and he helped lay the groundwork to make our team more accountable to each other which propelled us to become champions. A wonderful family man and great friend, he personally took my career to another level, and I will always cherish the hours we talked, from breaking down defenses to raising a family. Rest in peace, John, you will be missed."