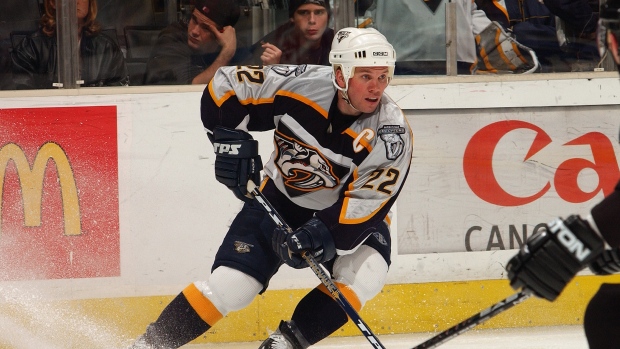 Former Nashville Predators captain and Canadian Olympian, Greg Johnson, has died at the age of 48.

A native of Thunder Bay, Ont., Johnson died at his home in Detroit on Monday. No cause of death was announced.

Greg Johnson captained the #Preds from 2002-06, including in their first playoff appearance. He was selected by the team in their expansion draft in 1998. pic.twitter.com/A1IUt2FE4e

Originally taken by the Philadelphia Flyers, Johnson - a centre - was the 33rd overall pick in the 1989 NHL Entry Draft out of the USHL's Thunder Bay Flyers.

He made his NHL debut in 1993 for the Detroit Red Wings with whom he played 187 games over four seasons before a trade to the Chicago Blackhawks. He would split the next season between the Blackhawks and Pittsburgh Penguins before being selected by the Predators in the 1998 Expansion Draft.

Johnson would play the final seven seasons of his career in Music City, succeeding Tom Fitzgerald as the franchise's second ever captain in 2002. His best season offensively came in 2001-02 when scored 18 goals and added 26 assists in all 82 games.

Johnson retired prior to the 2006-07 season when, after signing a one-year deal to return to the Red Wings, Johnson discovered abnormal EKG results during his physical.

Internationally, Johnson represented Canada on three occasions, coming home with silverware twice. In 1991, Johnson played alongside the likes of Eric Lindros, Kris Draper and Scott Niedermayer as Canada claimed gold at the World Junior Hockey Championships in Saskatchewan. Three years later, Johnson won a silver medal at the Lillehammer Olympics as Canada fell to Sweden in the infamous shootout for the gold medal in which Peter Forsberg potted the winner.

In 785 games over 12 NHL seasons with the Red Wings, Penguins, Blackhawks and Predators, Johnson scored 185 goals and added 224 assists.