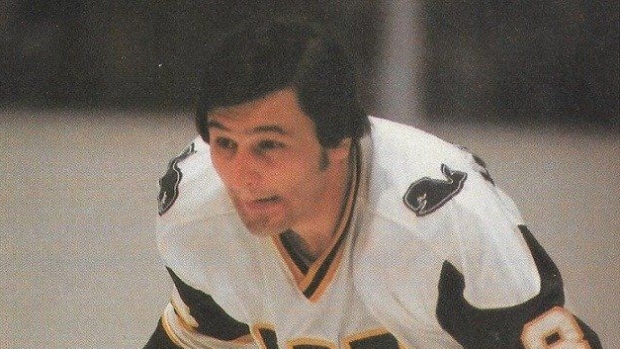 Tom Webster was honoured by the Carolina Hurricanes on Friday as the NHL club announced his death at the age of 71.

Webster was a player on the original New England Whalers in the inaugural season of the World Hockey Association in 1972.

Decades later, the Whalers had merged into the NHL and then moved south to become the Hurricanes. He was back in the fold for that debut too, serving as an assistant coach in the mid 1990s.

Webster was also the father-in-law of former Carolina video coach L.J. Scarpace, keeping him close to his former team.

"Tommy was down here a lot, over the past couple of years, just visiting," said Hurricanes head coach Rod Brind'Amour on Friday. "He talked to our group a lot, just telling old stories. He was a great man, that's the best way to describe him."

Webster, from Kirkland Lake, Ont., began his NHL career with the Boston Bruins before playing with the Detroit Red Wings and California Golden Seals. He had 33 goals and 42 assists in 102 career NHL games, but that was far from the end of Webster's professional hockey career.

He jumped to the upstart WHA for its inaugural season in 1972, scoring 53 goals and adding 50 assists with New England. He spent six seasons with the Whalers, tallying 220 goals and 205 assists in 352 games.

Webster returned to the NHL for a single game with Detroit in the 1979-80 season before becoming a coach.

He won a Calder Cup in the American Hockey League as co-coach of the Adirondack Red Wings, and went on to coach the New York Rangers and the Los Angeles Kings.

Webster went on to work as an amateur scout for the Calgary Flames and was inducted into the World Hockey Association's Hall of Fame in 2012.

This report by The Canadian Press was first published April 10, 2020.