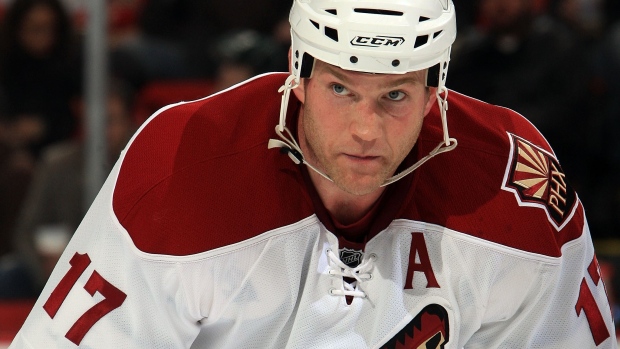 Todd Fedoruk played for six different teams - the Philadelphia Flyers, Anaheim Ducks, Dallas Stars, Minnesota Wild, Phoenix Coyotes and Tampa Bay Lightning - during his nine-year NHL career. He also struggled with substance abuse issues. The former enforcer talked to TSN Senior Correspondent Rick Westhead about how easy it is for players to find illegal drugs and how the professional athlete lifestyle can lend itself to the habit. The remarks have been edited for clarity.

Drugs are part of the nightlife. If it's making a comeback on the street, it's going to hit the kids going out, hitting the bars.

We're targets, man. It doesn't excuse us from bad choices, but we're definitely targets for guys to key in on and make friends with. We got money. We are naive. If you want to find drugs, it's not hard.

For me, I was 16 years old when I started. I was well on my way before the NHL. My path was completely sidetracked. My career enabled me to use drugs more.

One of the reasons I'm so candid about this is that I want to help others. That's the main purpose. I'm sick of hearing of guys dying. Ultimately that's what's happening. Guys, swallow your pride, humble yourself, and go ask for help because it's there.

You hear through the inner circle of players that guys are going through stuff. We have a different lifestyle that enables us, makes these choices easier. We're protected. People will look out for us because of our status and because at heart we're pretty good guys. It enables the behaviour that can get out of control. A normal person wouldn't be able to get away with the stuff we do. I got away with stuff because I was a hockey player.

Like getting pulled over by the cops. You're drunk, but they're like, 'You're drunk, but get home, take care of yourself.' For me it happened a few times. Driving around and you had a few drinks, and the cop could tell but he was a season ticket holder. So he'd follow you home. I guess it's a good thing but it enables bad things down the road. I'm not saying it happened every night.

It depends on where you are. In Philly, there's a history of (police) taking care of us.

It wasn't until the end of my career that I was using cocaine. I was sober for most of my career. I relapsed in Anaheim, the year I got hurt. I had a drink, and it was a slow drop down. I was using opiates like oxy, Vicodin, and pot and booze.

In Tampa, that was when I used cocaine. I found it, sought it out, knew who to ask. I'd ask bartenders, they're good to ask. You can see the guys who are there. I was as discrete as I could be. I used it and was like, 'Holy shit, I can't believe I'm back here.'

Maybe we're just prone to this problem as professional athletes. Our lives are extreme amounts of stress and then extreme amounts of nothing. You win and you're feeling great. You lose and it's the dumps.  The best thing is to be on an even keel, but the athlete lifestyle doesn't bode well for that.

There's got to be one or two guys on every team with problems. That's been my experience.

You're as ashamed when you're using it and you become a master at hiding it because your livelihood depends on it. It's easier to use during the summer. We're off for months and nobody knows where we go.

(Note: Lieutenant John Stanford of the Philadelphia Police Department responded to Fedoruk's comments in a statement to TSN: "We typically don't respond to the remarks of others; however, I will just say that the department would not condone any member giving someone 'special treatment' because of their career or personal status. The law is the law and our responsibility is to enforce it and uphold it, and if it is determined that an officer violated that oath, then he/she will be disciplined accordingly.")