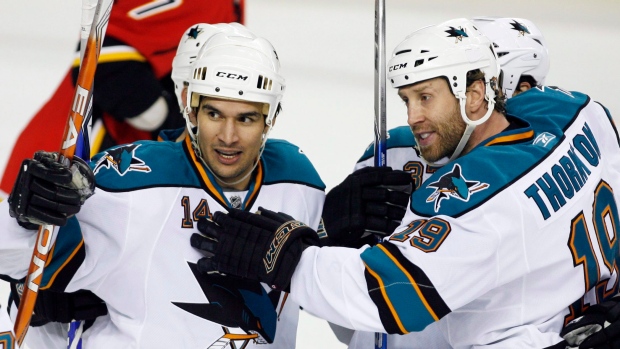 Former Maurice "Rocket" Richard Trophy winner as the NHL's top goal scorer, Jonathan Cheechoo has announced his retirement at the age of 37, following 16 professional seasons with nine of them coming as a member of the San Jose Sharks organization.

A native of Moose Factory, Ont., Cheechoo last played during the 2016-17 season with the Kontinental Hockey League's Bratislava Slovan.

Taken with the 29th overall pick of the 1998 NHL Entry Draft out of the Ontario Hockey League's Belleville Bulls, Cheechoo appeared in 501 NHL contests with the Sharks and Ottawa Senators over six seasons.

A 20-goal scorer on four occasions, Cheechoo's best year offensively came in the 2005-06 season when he scored 56 goals and added 37 assists on his way to claiming the Rocket Richard Trophy. His 291 points in five seasons is good for eighth all-time in Sharks scoring.

"I have been privileged to be able to reach my goals and to play the game that I love," Cheechoo said in a statement. "Hockey has taken me from Moose Factory to San Jose and many places around the world.

"First of all, I would like to thank the San Jose Sharks organization for drafting me and giving me the opportunity of playing in the National Hockey League. We had many awesome years of incredible hockey! I want to thank all of my former teammates. It was an awesome experience to play alongside all of you. You made the game enjoyable and helped me to become a better player and person."

Cheechoo was dealt to the Sens in 2009 as part of the Dany Heatley trade. He played one season in Ottawa, but was bought out at the end of it. After tryouts with the Dallas Stars and Sharks, Cheechoo signed a two-way deal with the St. Louis Blues in 2011, but never returned to the NHL. Following three years in the American Hockey League, Cheechoo made the move to Russia in 2013and played for four seasons in the KHL.

A member of the Cree First Nation, Cheechoo's heritage played a strong role in his career.

"With the tremendous support of his immediate family and his extended Cree First Nations family, Jonathan completed a remarkable journey from one of North America's remote locations to an elite National Hockey League player," Sharks general manager Doug Wilson said in a statement. "His hard work and persistence made him one of the most beloved players in Sharks history. Off the ice, you would be hard-pressed to find a more humble and respectful individual. We congratulate him and his family on a fantastic hockey career."

The Sharks will honour Cheechoo ahead of a March 24 game against the Calgary Flames.