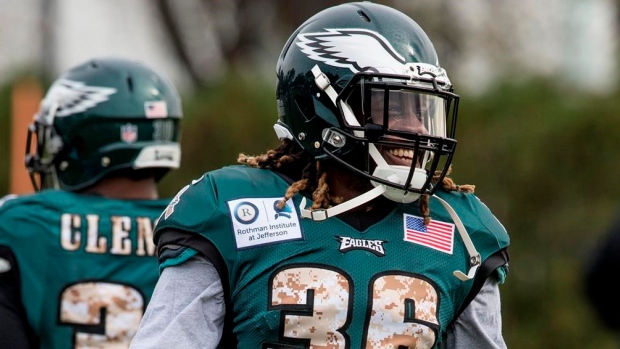 Jay Ajayi has already proven himself on the football field. Now the lifelong soccer fan and avid gamer will have a chance to do so on the virtual pitch.

In a groundbreaking move, the Philadelphia Union announced Tuesday they have signed Ajayi, the Pro Bowl running back who helped the Philadelphia Eagles win Super Bowl LII over the New England Patriots nearly two years ago, to compete for the team in the eMLS, Major League Soccer’s esports venture, beginning with eMLS League Series One in Philadelphia this Friday.

Born in London, England, the 26-year-old Ajayi is the first NFL player and one of the first pro athletes to sign on as a pro gamer.

“Philadelphia holds a special place in my heart so I am blessed to be able to represent the city in the esports realm and to become one of the first pro athletes to become a professional gamer. It combines two of my passions, soccer and gaming,” Ajayi said in a team statement.

“I’m a competitor, so you’re going to see me give my all for the Union at every eMLS event this year,” said Ajayi, who was named to the Pro Bowl in 2017 after rushing for more than 1,200 yards and eight touchdowns in his final full season with the Miami Dolphins. He’s currently a free agent after spending the first two seasons of his NFL career with Miami.

Heading into its third season, the eMLS features 25 professional players competing in three events throughout the campaign, culminating the in the 2020 eMLS Cup at South by Southwest (SXSW) in Austin, Texas, on March 21. Gamers representing 25 of the league’s 26 franchises compete for cash prizes and qualification points toward the FIFA eWorld Cup. The eMLS League Series Two will take place in Portland, Ore., on Feb. 15.

Ajayi will have his work cut out for him in attempting to replicate the Union’s success in the second season of the eMLS. Cormac “Doolsta” Dooley, the Union’s eMLS player in 2018, completed the league’s treble, winning both League Series as well as the eMLS Cup. The Temple University student signed with eMLS newcomers Nashville SC during the off-season.

“Jay has the fight, grit and winning mentality that Philadelphia is known for, and it quickly became clear to us that his love of the city, soccer, and gaming made him a great fit for our esports team” said Doug Vosik, Union chief marketing officer. “The Philadelphia Union is a leader and innovator in eMLS and has a decorated past, having brought home the League Series 1, League Series 2, and eMLS Cup trophies last year. Signing Jay is another groundbreaking move in eMLS and we are excited to see what he can do.”