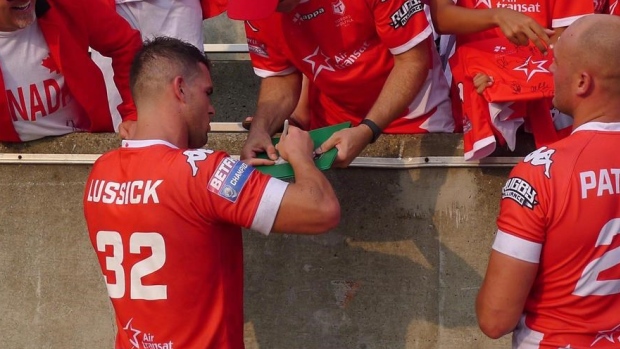 Lussick was one of Toronto's two marquee players prior to the signing of Sonny Bill Williams in November 2019. Only 150,000 pounds ($260,200) of a designated player's contract counts against a team's salary cap.

The 31-year-old Lussick joined the Wolfpack in April 2018 from Australia's Manly Sea Eagles. He has made more than 100 National Rugby League appearances for Manly and Parramatta.

"I’m stoked to be joining Salford," Lussick told the club website. "My brother’s told me it’s a really family-orientated club, where everyone’s close.

“I’ve lived in Salford for two years now. My house is two minutes from the ground and while I’ve been here, I’ve really noticed the city getting behind the club. You go to the ground and you see how passionate the supporters are."

Salford head coach Richard Marshall welcomed the arrival of a player he called a "dominant front-rower."

“He’s an aggressive competitor, who I am looking forward to working with. He’ll also be fresh, as he hasn’t played for a year after representing Toronto."

The Wolfpack stood down July 20, saying it could not afford to play out the remainder of the super League season. The transatlantic rugby league teams subsequent bid to win reinstatement for the 2021 season under new ownership was voted down in November.

This report by The Canadian Press was first published Jan. 1, 2021