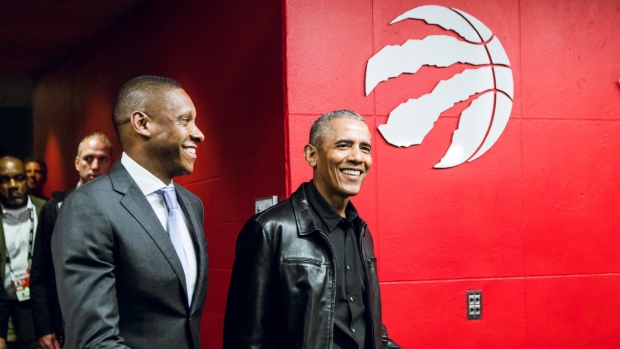 Obama was accompanied by Raptors president Masai Ujiri as he walked past the Toronto dressing room prior to the game against the defending champion Golden State Warriors at Scotiabank Arena.

He was seated next to NBA commissioner Adam Silver near the floor of the lower bowl. They were easy to spot given they were some of the few fans not wearing the red We The North giveaway T-shirts.

Obama and Drake exchanged a hug and a handshake before taking their separate seats.

Obama got a standing ovation when he was introduced and shown on the video screen midway through the second quarter. Obama stood and waved back, mouthing "Thank You."

The ex-president had been in Ottawa for a speaking engagement. He also met with Prime Minister Justin Trudeau at a local brewery on Friday.

Trudeau watched the game on TV.

Canadian musicians Win Butler, Dallas Green, Paul Langlois and two members of the Arkells were also in the house.

The celebs saw the Warriors rally for a 109-104 win that evened the best-of-seven series at one game apiece.

Flo Rida, wearing a Raptors No. 1 jersey, entertained at halftime.

Drake was in his normal courtside perch for the evening.

Outside, former Raptor Jalen Rose indulged in some crowd-surfing in Jurassic Park with the crowd passing the ESPN broadcaster around.

A basketball buff, Obama played on both the junior varsity and varsity teams at Hawaii's Punahou School, winning a state championship in 1979. He went on to play for Occidental College and has since hosted more than a few pickup games.

As president, Obama would also famously share his NCAA tournament bracket. He also hosted the NBA champion Warriors at the White House in February 2016 to celebrate their 2015 championship.

With 106 million Twitter followers, Obama is likely one of the few who deserves a better seat than Drake (38.2 million followers). Drake does have quite an edge on Instagram — 57.6 million followers for the rapper to 22.7 million for the ex-president.

Earlier, Golden State coach Steve Kerr introduced some politics into the pre-game equation by wearing a "Vote For Our Lives" T-shirt.

"The shirt has everything to do with the tragedy in Virginia Beach a couple days ago, and how devastated so many families are and so many people are," he said when asked about the T-shirt. "The shirt is a reminder that the only way we can get out of this mess is to actually vote, and to vote for people who are going to be willing to create some change in our gun laws in our country.

"The young generation, the March For Our Lives generation, has really inspired me. So I offer my support to them and to all young people, and hope that we can create a change where we don't all have to walk around scared we're going to get shot in our country."

Kerr put the shirt back on for his post-game media duties.