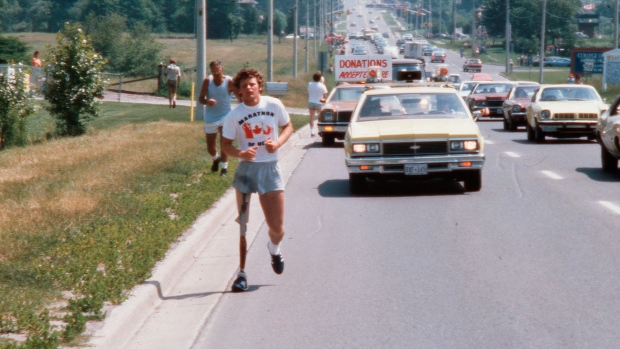 This spring marks the anniversary of one of the great stories of perseverance and hope against the longest of odds in Canadian sports history.

But it's not the story of a pitcher's perfect game or a guard torching his opponents in the fourth quarter. It's not the tale of an unbeatable goalie or a running back who just couldn't be stopped. It's the story of one young man's battle against himself and against a horrible enemy that far too many Canadians know all too well.

Forty years ago this past April, a 22-year-old from Port Coquitlam, B.C., named Terry Fox dipped his right artificial leg into the Atlantic Ocean in St. John's and took off. Fox began "The Marathon of Hope," an ambitious - perhaps even impossible - trek across the country along the Trans-Canada Highway to raise money (and awareness)for cancer research. The run began with little fanfare, but by the time it was over, Fox had captured the imagination of an entire country.

Four years earlier, Fox became all too familiar with cancer. Born in Winnipeg, Fox and his family relocated to B.C. for his formative years where Fox became an active teenager, throwing himself into sports. But circumstances changed for Fox in 1976 when he was diagnosed with osteogenic sarcoma, a form of bone cancer. A year later, the cancer claimed most of his right leg. Fox required amputation of everything up to 15 cm above the knee and was fitted with a prosthetic.

The experience with cancer changed Fox, but not just physically. In undergoing treatment for the disease, Fox became acquainted with other Canadians dealing with cancer, with many of them being children. Seeing their bravery in facing hardship impelled Fox to act. There just wasn't enough money being directed towards cancer research and that needed to change.

"[I saw] kids my age and younger and you just can't leave something like that and try to forget it," Fox said. "I couldn't, anyway. I had to try to do something about it."

This was the genesis for "The Marathon of Hope." But Fox simply couldn't just run across Canada. He wasn't ready for something that arduous. Fox needed to build up to it. He let close friend Doug Alward in on his plans and began preparation for it. Running with a prosthetic brought with it its challenges and Fox needed to get accustomed to the gait with which he'd run and any pain he would encounter.

In the fall of 1979, Fox competed in a 17-mile run in Prince George, B.C. He was the last to finish, but he did finish. Fox knew he was ready to go bigger. He reached out to the Canadian Cancer Society (CCS) to let them know what he was about to undertake and appeal for their cooperation in a letter.

But Fox never promised any miracles himself. He didn't say that his run was going to forever eradicate the disease. But it would be a start. And while his run might not lead to a cure, maybe somebody who would benefit from the money being raised or who was inspired by Fox's journey would. His goals were lofty - Fox wanted to see $1 million raised towards research.

The CCS was on board, provided that Fox would receive medical clearance, which he got (Fox also had an enlarged heart, complicating matters). He then sent out additional letters looking for corporate donations.

"I could not leave knowing these faces and feelings would still exist even though I would be set free from mine," he wrote in the letter. "Somewhere, the hurting must stop, and I was determined to take myself to the limit for those causes.

One of the companies that responded was Adidas, who outfitted Fox with 26 pairs of the now-iconic navy Orion running shoes for him to use on his run,becoming one of his original sponsorsafter Fox wrote a letter to the shoe and clothing manufacturer seeking assistance.

Adidas is commemorating the 40th anniversary of the Marathon of Hope with a new collection that seeks to raise $1 million for the Terry Fox Foundation over the next six months. Beginning on May 20, Adidas will release a series of drops from the Terry Fox collection. The first drop will see the release of a Terry Fox T-shirt, as well as an updated version of Fox's iconic Orions featuring his name on the side of the shoes.

After 14 months of training and preparation, through blood, sweat and tears and through 3,000 miles of running to prove his mettle, the Marathon of Hope was a go. Accompanied by only Alward in a camper van, Fox set off from St. John's on April 12, 1980.

Over the next 143 days, Fox would run almost the equivalent of a daily marathon. Conditions were at times bleak. The road, itself, was perilous. Fox would encounter drivers who didn't know what he was doing and force him off the road in close calls. The relationship between Fox and Alward grew strained, with the pair not speaking to each other at times.

But word of Fox's mission began to spread around the country with interest growing as Fox continued to head west. By the time Fox reached Ottawa on Canada Day, the nation's capital rolled out the red carpet. Fox met with Prime Minister Pierre Trudeau. He performed the ceremonial kick-off at an Ottawa Rough Riders CFL game. The reception in Ottawa helped reinvigorate Fox's drive that at times had laboured when Fox began to doubt the entire enterprise.

Days later in Toronto, it was much the same. There was a rally in his honour at Nathan Phillips Square and he threw out the ceremonial first pitch that night at the Blue Jays game. Maple Leafs captain Darryl Sittler even met Fox on his route, presenting him with his All-Star Game jersey from earlier that year.

In the last days of August, Fox found himself in Northern Ontario. It would be there where he ultimately felt the toll of the run. In focusing all of his energy on the run, Fox neglected himself. Follow-up appointments with doctors were missed and needed tests weren't taken.

On Sept. 1, the pain became too great to bear. After 18 miles that day, Fox stopped his run. There was a pain in Fox's chest and coughing fits began to overwhelm him. Outside of Thunder Bay, Fox asked Alward to take him to a hospital.

Doctors confirmed the worst - not only had the cancer returned, it had also spread. The cancer was now in Fox's lungs. Fox summoned his parents to Thunder Bay. After 143 days and 3,339 miles, the Marathon of Hope was over.

Fox met with the media and promised that even with the return of his cancer, he remained undaunted to reach his goal.

"That's the thing about cancer," Fox said. "I'm not the only one. It happens all the time, to other people. I'm not special. This just intensifies what I did.It gives it more meaning. It'll inspire more people. I could have sat on my rear end,I could have forgotten what I'd seen in the hospital, but I didn't."

Fox returned home to B.C., but the money kept coming in. A national telethon raised more than $10 million. Provincial governments sent in donations. When it was all said and done, the Marathon of Hope raised north of $23 million.Personal accolades also rolled in for Fox, who was the recipient of the 1980 Lou Marsh Trophy as Canada's top athlete.

Fox died months later on June 28, 1981. That fall marked the first edition of the Terry Fox Run, a charity event in Fox's memory that remains an annual event to this day. Since its inception, the Terry Fox Run has raised in excess of $750 million towards cancer research.

Terry Fox might not have completed his Marathon of Hope, but what he did accomplish was even greater, establishing a legacy of courage, selflessness and invaluable resources for others to continue the battle that he so valiantly waged.