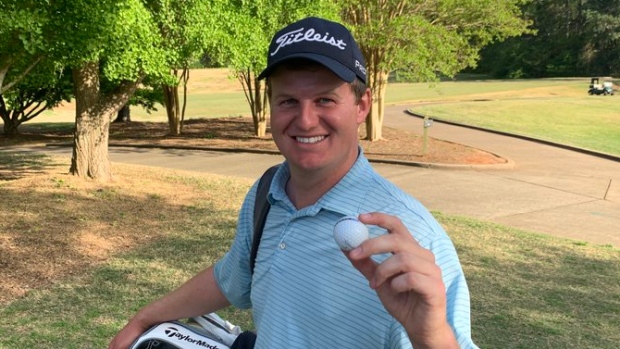 PINE MOUNTAIN, Georgia—The wind swirled all day at Callaway Gardens’ Mountain Course, but four players rose above the difficult conditions to finish at 9-under to share the lead at the Mackenzie Tour – PGA TOUR Canada’s fifth Qualifying Tournament. Amateur Alexandre Fuchs had the low round of the day among the leaders, a 5-under 65, while Austin Morrison and Patrick Cover shot 66s, with Luke Schniederjans’ 67 giving him a spot among the leading quartet. Their three-day totals of 201 give them a three-shot lead over Patrick Moriarty with 18 holes to play. Jimmy Beck is alone in sixth, four strokes behind.

The player who emerges victorious from Friday’s final round earns the right to play in every 2021 Mackenzie Tour tournament, while those finishing in second through sixth places are exempt for the season’s first half.

With bad weather expected to hit Callaway Gardens at midday Friday, officials have set up a two-tee start, with Fuchs, Morrison and Cover making up the final group teeing off at 10:20 a.m., EDT, while Schniederjans will play with Moriarty and Jimmy Beck. They tee off at 10:10 a.m. Beck is alone in sixth and four shots behind the leaders.

Cover compared his opening-round 66 to Thursday’s identical score, and he said there was no comparison. “It was certainly better than 4-under the first day,” he quipped. “Today was really tough. The wind was swirling just about as much as any course as I’ve ever played. The back nine in the trees you’re switching direction on every hole, and the wind never stayed consistent. It was really hard to be committed to the wind direction and hitting the yardage you wanted to.”

Cover and the rest of the leaders managed enough on the back nine, while Morrison had a highlight on No. 7 when he turned the seventh hole into a personal highlight that resulted in his second career ace. The first came in U.S. Open local qualifying in North Carolina.

“I hit my 8-iron with the wind down off the right. I caught it pretty good, and I guess it went in on a couple hops,” he said of the shot that playing partner Cover confirmed had gone in. Morrison followed that with a birdie-par finish to his front nine, turning in 2-under 33. He made three birdies and a bogey on his back, including a birdie at the closing 18th to force his way into the tie.

Fuchs, a senior at Liberty University, is easily the low amateur among the 15 in the field. He put together seven birdies to go with his lone bogey, at No. 2. His birdie parade started at the par-4 fifth. “I hit a good drive on five and got rewarded for that,” said the native of Mouans-Sartoux, France.

Despite holding a share of the lead, Schniederjans, the solo 36-hole leader, walked off the course frustrated. He missed a four-footer for birdie on No. 11, a six-foot birdie effort at No. 12 and he three-putted for bogey at the par-3 17th.

“It was frustrating three-putting 17 and missing some of those short putts,” the Georgia Tech alum noted. “You’re not in the lead in every tournament, and I’ll use that as a positive. It's encouraging.”

Did you know Canadian Joey Savoie has never played in a Mackenzie Tour tournament as a professional? Currently tied for seventh, Savoir has four career starts, coming in 2018 and 2019, all as an amateur. His top showing came at the 2018 Staal Foundation Open, where he tied for 62nd.

How the Tournament Works

Ninety-four players entered this tournament and 92 are still playing. Below is a breakdown of the various Mackenzie Tour membership statuses available this week.