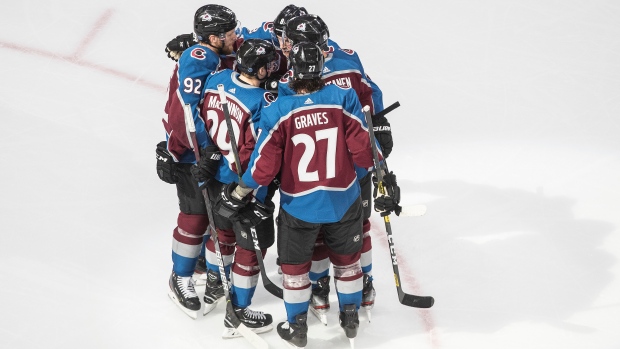 To say the first round of this year’s Stanley Cup Playoffs has been on the more predictable side of things would be quite an understatement. We have long grown accustomed to a modern era of hockey where parity is omnipresent, and upsets, especially earlier on in the tournament, are quite common.

The preceding play-in round – a unique feature of this year’s postseason due to the stoppage of the regular season back in March – was wild, frenetic, and full of surprises. Some observers felt that these Cinderella teams – the teams that pulled off upsets in the play-in round and had an additional week of competitive hockey to get back to playing shape – would be able to stick around for a deep run.

The extra playing time may or may not have helped. But one thing we do know is that there is still a sizable talent gap between the league’s elite teams and the muddied middle of the NHL. It would appear that any positives teams realized from participating in the play-in round diminished as soon as the level of competition increased.

Four teams – the Tampa Bay Lightning and Boston Bruins out East, and the Colorado Avalanche and Vegas Golden Knights in the West – have established themselves as favourites to reach their respective conference finals. Add the St. Louis Blues into the fold, and you have the betting market’s five favourite teams.

The Blues are in a dogfight with a very game Vancouver Canucks team. The other four rolled in stunning fashion: 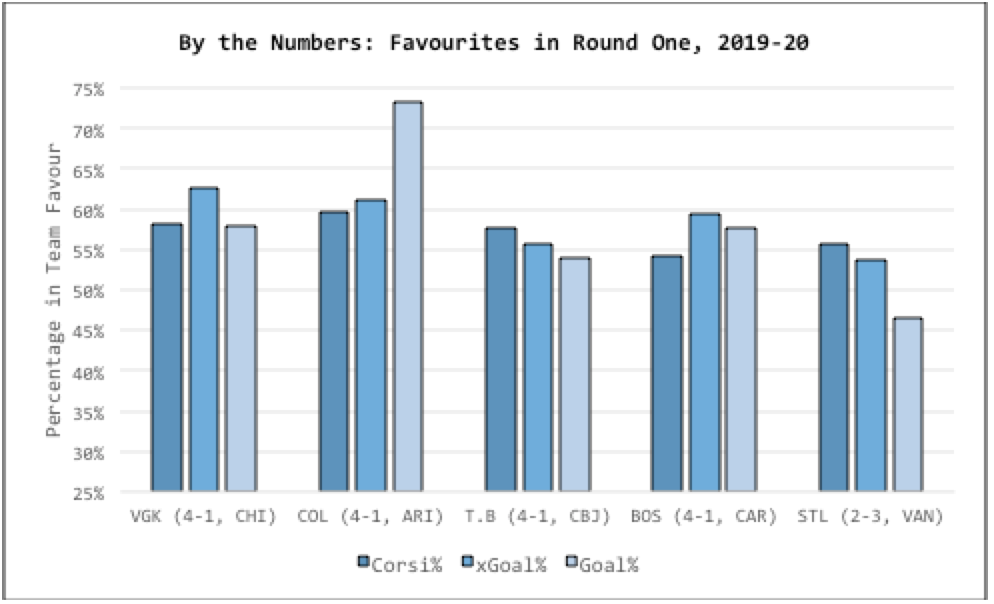 You might look at this and think that the Blues deserve a better fate than facing elimination in Game 6 on Friday night, and you wouldn’t be wrong. But it is important to note that these even-strength measures, while hugely important, aren’t the entire story. Losing the special teams and goaltending battle can be killers, and the Canucks have the Blues edged considerably there too. (St. Louis is also driving their numbers primarily from the Ryan O’Reilly line, though to understate that trio’s dominance would be a colossal mistake.)

The other four teams? I mean, what more can you say? The Western Conference matchups weren’t competitive. Chicago and Arizona both pulled off impressive play-in round upsets as the two lowest-seeded teams in the play-in round, and then were demoralizingly picked apart by Vegas and Colorado – two teams with no holes in their current lineups.

The Eastern Conference matchups were more of the same. Columbus worked tirelessly to try and bog down the Tampa Bay attack, and goaltender Joonas Korpisalo was outstanding in keeping games close. Boston drew – by a considerable margin – the toughest opponent of the four and had their starting goaltender leave in the middle of the series, but still held a very strong Hurricanes team to just eight goals over a five-game span.

These teams are flush with stars, but the mismatches down the lineup can be just as noticeable. The Vegas-Chicago series was a great example of this – even the fourth line for the Golden Knights (which generally features Ryan Reaves and Will Carrier with a rotating third forward) was carrying nearly 60 per cent of the play, a jaw-dropping number for depth skaters: 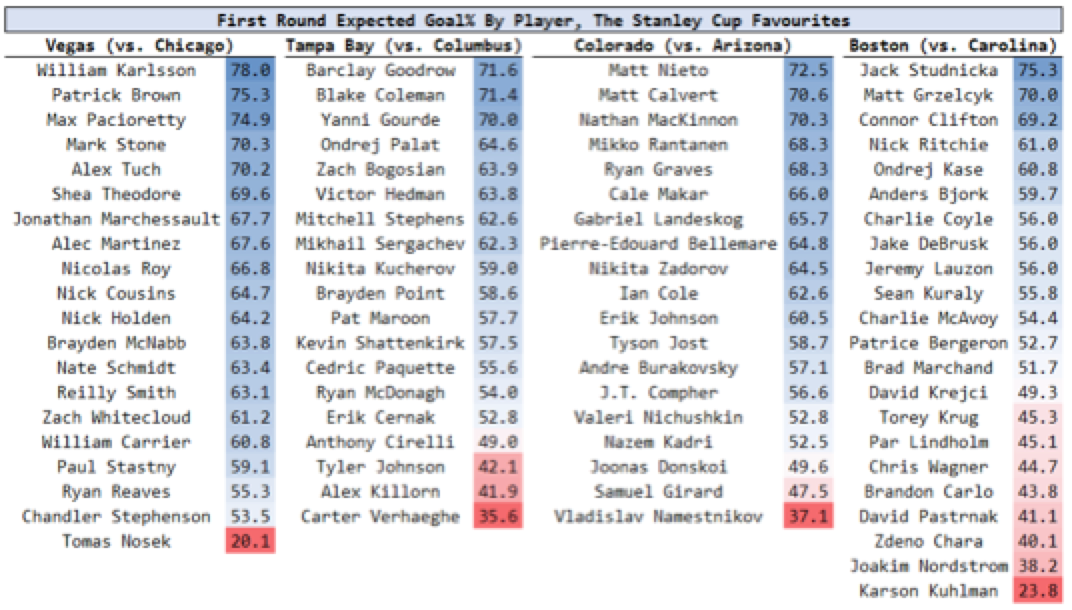 The point here is that these series weren’t one-sided merely because the stars at the top of the lineup went wild. They did, but so did many players behind them.

These four teams are certainly unique from one another – Vegas and Colorado have a decisive depth advantage over any team in the league, Tampa Bay’s offence can rarely be slowed and Boston’s defence is capable of shutting down any club in hockey. But even with varying identities, their overall team talent appears materially higher than the rest of the pack. We expected that to be the case, and Round 1 is reinforcing it.

I do think there are interesting offshoot questions for the league to consider going forward. It’s hard to react to just one year and a handful of matchups, but the tremendous excitement generated by the play-in round can create diminishing returns in subsequent rounds as the talent disparities widen.

The good news? A lack of upsets in Round 1 creates some really intriguing matchups in Round 2 and beyond where we’re going to be served full portions of best-on-best hockey.