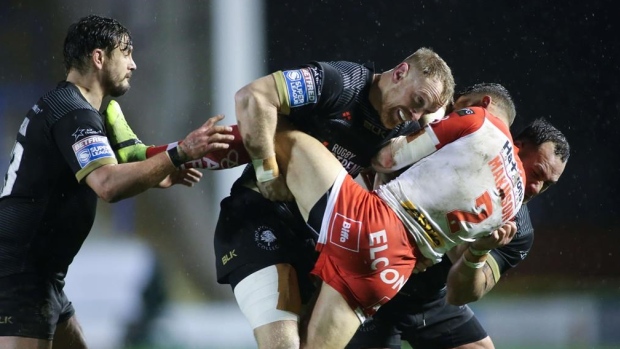 Four Toronto Wolfpack players have been told to self-isolate after experiencing "mild possible symptoms of COVID-19."

The transatlantic rugby league team, which is currently based in England, played the Leeds Rhinos on March 5. Leeds subsequently advised that one of its players had self-isolated after showing "symptoms of possible coronavirus."

The Rhinos opted to not to travel to France to play its scheduled game Saturday against Catalan Dragons. The game had been scheduled to be played behind closed doors at Stade Gilbert Brutus in Perpignan following a local ban on gatherings of more than 1,000 spectators.

The Rhinos have since said their player was tested Friday, returning a negative result for the virus.

The Wolfpack, who played the Huddersfield Giants in Coral Challenge Cup play Wednesday, checked all their players for symptoms in the wake of the original Leeds news.

On Sunday, they took further action.

"We take this very seriously and as a precaution, we have stood down our entire playing staff in the U.K.," Toronto coach Brian McDermott said in a statement.

"We train in an environment where we interact with students and members of the public and we vehemently do not want to act as a possible vector for COVID-19 which is why we have taken this immediate action," McDermott added.

"The health and welfare of our players, staff, fans and partners is always our primary concern. Our main goal is to prevent any further spread to our playing squad and their immediate family members, therefore we are now postponing all practice and have tasked our squad with keeping themselves healthy.

"We will continue to monitor this while providing updates to our League's governors and wait for a directive from them."

Toronto, which had the weekend off, is slated to play next March 22 at Wakefield Trinity. The Wolfpack aren't scheduled to play at home until April 18.

England's Super League is one of the few English leagues to continue playing during the virus outbreak.

"It makes sense to follow suit of what the Premier League is doing," McDermott said in an interview. "We're aware that the RFL (Rugby Football League) and Super League are in dialogue with clubs and we await their direction."

On Sunday, the RFL said it was following the British government's advice.

"The government guidance was there was no medical rationale to call off games this weekend, and this was followed by rugby league and many other sports," it said in a statement.

"The situation is fast-moving and evolving. By the end of the weekend the RFL will have sent further detailed papers to all clubs in the Betfred Super League, Championship and League 1 on the in-depth plans developed by the governing body over a number of weeks, in discussion with both clubs and broadcast partners.

Meetings will be held with the professional leagues at the start of this week to continue contingency planning and discussions around all competitions and events together."

This report by The Canadian Press was first published March 15, 2020.