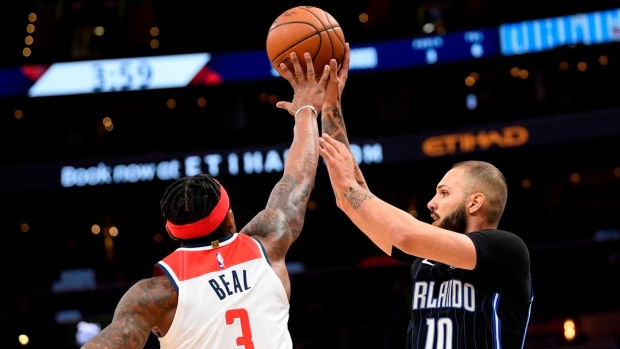 WASHINGTON — A game against his hometown team provided the latest highlight in Markelle Fultz’s development.

Fultz, a native of nearby Marlboro, Maryland, scored a career-high 20 points and added six assists in the Orlando Magic’s 127-120 victory over the Washington Wizards on Tuesday night.

“I caught a lot of eyes with a lot of family (and friends in the crowd),” Fultz said. “It brings joy to my heart to know that they can see me playing basketball happy and just doing what I love.”

Fultz’s previous career high was 19 points in a home win over the Wizards on Nov. 17.

The No. 1 pick in the 2017 NBA draft, Fultz played just 14 games for the Philadelphia 76ers as a rookie and 19 last season because of a shoulder injury. He played his 20th game of the season Tuesday and came in averaging 11.7 points.

“He's a baller,” forward Aaron Gordon said. “This is what we expect from him every night, not just in his hometown.”

Evan Fournier scored 31 points and D.J. Augustin added 16 of his 24 in the fourth quarter for Orlando, which has won three of four after earning just its second road victory of the season.

“They’re a long, athletic team and I thought they made 3s throughout the game but they made timely ones as well,” Wizards coach Scott Brooks said. “We fought and we battled and we were obviously short-handed but we competed.”

Bradley Beal scored 42 points for the Wizards, who have lost five of six.

Fournier scored 32 in Sunday’s win over the Golden State Warriors.

The Wizards were without starting centre Thomas Bryant, who was diagnosed with a stress reaction in his right foot Tuesday and will be re-evaluated in three weeks.

The Wizards trailed by 14 at halftime but Bertans’ second 3-pointer of the quarter pulled Washington within 74-67 early in the third.

Beal’s 3-pointer followed by Thomas’ basket and another 3 by Beal gave Washington its first lead of the game at 75-74, completing a 21-6 run.

A flagrant foul call on Beal contributed to seven straight points by Augustin in the fourth and Orlando led 104-88 with 10:45 remaining.

The Wizards got within 127-120 on Jordan McRae’s 3-pointer with a minute left.

Magic: Gordon had 18 points and 11 rebounds. … Carter-Williams returned after missing six games because of left hip irritation and scored five points in 13 minutes.

With Bryant out, rookie forward Rui Hachimura (15 points) slid over to the centre spot with Bertans starting at forward. Isaac Bonga started in place of Troy Brown Jr., who had five points and eight rebounds in 21 minutes off the bench.

“We need his defensive tenacity, his staying in plays, his length,” Brooks said of Bonga before the game. “It also gives Troy a spark. He hasn’t played well. He’s done a lot of good things, but there’s things (he) knows he can play better, and I think this could give him a spark playing with that second unit.”