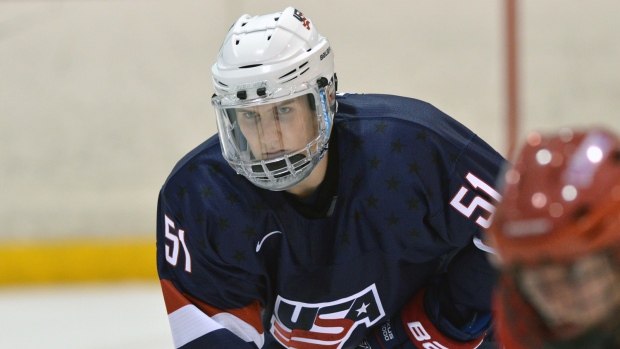 Hurricanes owner Tom Dundon said Monday his team will look to trade Harvard defenceman Adam Fox rather than risk losing him for nothing in 2020.

TSN Hockey Insider Pierre LeBrun reported Monday that Fox, a prospect acquired last June from the Calgary Flames, was unlikely to sign with the Carolina Hurricanes.

“We’ll try to trade him,” Dundon told the Raleigh News and Observer. “I think we’ll do OK. We’ll see.”

Harvard was eliminated in the NCAA regional semifinal by Northeastern on Mar. 29. If Fox signs this year, he is eligible to burn off a year of his entry-level contract.

In 32 games with Harvard this season, Fox has nine goals and a team-leading 48 points with a plus-26 rating. Harvard is set to take on Massachusetts on Friday in the Northeast Regional semifinal of the NCAA Tournament.

The Jericho, N.Y., native dismissed rumours in December that he planned to spend his senior season at Harvard and sign with the New York Rangers during the summer of 2020.

“I know people think I have some plan to sign with the Rangers because of where I grew up,” Fox told The Athletic. “But my dream, my goal, is to play in the NHL. As soon as possible.”

LeBrun said Monday he believes the Rangers would be interested in acquiring Fox, was ranked No. 12 on TSN Director of Scouting Craig Button's annual list of the Top 50 NHL-affiliated prospects in January, via a trade.

Fox also represented Team USA at the World Juniors in 2017 and 2018 and is one of 10 finalists for this year's Hobey Baker Award.

The Hurricanes acquired Fox last summer along with Dougie Hamilton and Micheal Ferland from the Calgary Flames for Elias Lindholm and Noah Hanifin. The 21-year-old was a third-round pick of the Flames in 2016.