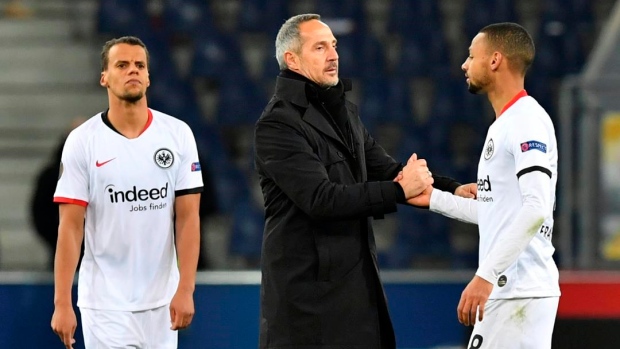 The German side, which had won the first leg 4-1 in Frankfurt, next faces Basel after being drawn against the Swiss side earlier Friday.

Salzburg’s quest to overturn a three-goal deficit began a day later than planned after the game was postponed on Thursday due to storms in the region. The decision was made by local authorities, police, UEFA and representatives of both clubs as the safety of spectators could not be guaranteed.

The home side made a furious start and captain Andreas Ulmer let fly from the edge of the penalty area to score in the 10th minute.

Frankfurt ‘keeper Kevin Trapp made a brilliant save to deny Sekou Koita before emerging from goal to block Patson Daka as Salzburg kept the visitors under pressure.

Silva equalized in the 30th with a header to Filip Kostic’s cross, leaving the home side somewhat subdued for the rest of the half.

Jerome Onguené put Salzburg back in front on the night with a header to Dominik Szoboszlai’s corner in the 72nd, but Silva killed off any hopes of an unlikely comeback with a deflected shot that curled inside the far corner in the 83rd.