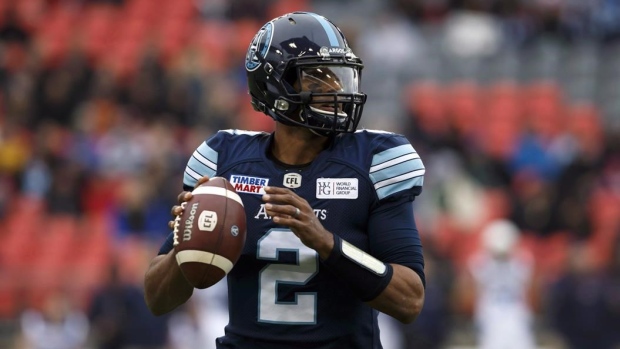 The Toronto Argonauts quarterback had just endured a miserable 2018 that saw the starting job fall into his lap and then slip through his fingers.

He went over and over the sequence of events after veteran pivot Ricky Ray went down with what would eventually become a career-ending neck injury. Franklin was thrust into the spotlight, but soon found himself frustrated and on the bench in what would turn into a miserable 4-14 campaign for Toronto.

"The mistake I made was coming in thinking like a follower and not being a leader," the 27-year said after a recent training camp session. "I was trying to do things that weren't me. I was trying to adjust and adapt, and I made some bad decisions."

With the starting job once again his to lose, a coaching change and renewed confidence, Franklin is heading into 2019 optimistic.

But the disappointment of last season still lingers.

"This year, I'm being more confident in my choices and being a little more assertive."

The Oklahoma City native was acquired by Toronto in a December 2017 trade with Edmonton to be Ray's heir apparent. He had attempted just 43 passes the previous two seasons as Mike Reilly's understudy with the Eskimos, but was viewed as a potential No. 1 QB down the road.

Franklin had some initial success following Ray's injury before getting benched by former Argonauts head coach Marc Trestman, going a pedestrian 187-for-286 passing (65.4 per cent) for 2,034 yards with eight touchdowns against nine interceptions.

The Missouri product has always been able to process what's going on around him — good or bad. Last season, however, he found unlikely sources of angst.

"I didn't expect the challenges on my own team, whether it be coaches or players," said the six-foot-two, 225-pound Franklin, who also ran for 14 TDs in 2018, mostly on short-yardage plays. "I've always been prepared for the other team, but not mine.

"This winter it was, 'OK now I need to not be worried about what my teammates might be saying in a negative way or if I do something wrong or if they do have an opinion, not to take that personally and not try to adjust what I'm doing because I'm confident in what I do.'"

Newly-hired Argonauts head coach Corey Chamblin said he won't ask Franklin to be anything more than himself.

"It's not all on him, it's on all of us," Chamblin said. "He'll earn that right to be the leader of this football team."

Franklin said the two chatted four times over the off-season. Chamblin challenged him to be stronger mentally, be it within the locker-room dynamic or on the field.

"Having him on my side is huge," said the QB. "I like the conversations that we've had and how is towards me."

Franklin also has a new weapon with the addition of Derel Walker in free agency to a receiving corps led by S.J. Green. Walker and Franklin were rookies together in Edmonton, both starting from the bottom of the depth chart.

"I remember it like it was yesterday," Walker said of their first camp in 2015. "I've seen his growth. I'm ready to continue seeing his growth."

During a recent practice, Franklin heaved a deep touchdown to Green during 12-on-12 drills before finding Walker for another big gain over the middle two plays later.

"I'm pumped," Franklin said. "We have the chemistry, but (Walker's) another voice in the locker-room that knows what I can do.

"A lot of the guys saw what happened last year, but Derel knows me from the core, from the beginning."

Franklin said while plenty of factors went into his disastrous 2018, he learned to ultimately take responsibility, especially when it came to his attitude after getting benched.

"I got the opportunity to play again," said Franklin, who threw for 6,692 yards and 51 touchdowns to go along with 1,729 yards and 21 TDs on the ground in four college seasons. "I was like, 'Oh great. So our season's over and now I get to play?' I should have been looking at it as time to improve and get back to my old self.

"I did a lot of reflecting. It was challenging and I had to bite the bullet a little bit on myself, my mentality, and put the blame on me."

Franklin took something different from being around both Reilly and Ray, who have a combined six Grey Cup rings, during his first four pro seasons. He was impressed by Reilly's resilience, while Ray's similar demeanour was a reassurance he was on the right path.

"From Mike, it was overcoming adversity," Franklin said. "And from Ricky, it was staying true to yourself."

Two lessons, along with his own self-improvement, he hopes will help spark a turnaround for both himself and the Argonauts in 2019.