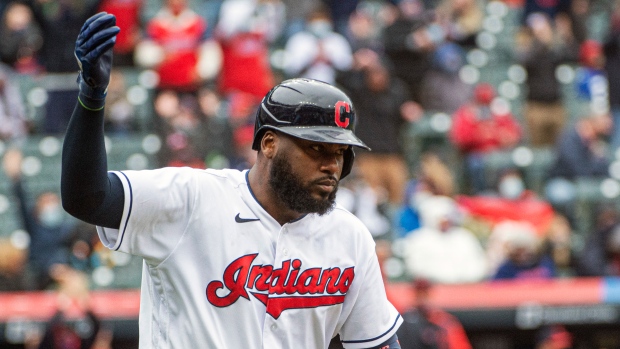 CLEVELAND — Franmil Reyes hit a three-run homer, tripled and stole his first career base, helping the Cleveland Indians avoid a four-game series sweep with a 7-3 victory over the New York Yankees on Sunday.

The burly 6-foot-5, 265-pounder homered in the fourth off Jameson Taillon (0-2) to give the Indians a 4-3 lead, then led off the sixth with his second big league triple and scored on Jordan Luplow’s double against Nick Nelson to extend the advantage to 6-3.

Both of Reyes’ triples and his initial theft occurred during the series at Progressive Field, where the Yankees were seeking their first four-game road sweep of Cleveland since 1996.

“After the stolen base, I was like, wow this is unbelievable,” Reyes said. “With the elements and the field here, you can get a triple any day, but the stolen base was a little bit out there. That surprised me, for sure.”

New York -- tied for last in the AL East at 9-12 -- went up 3-0 in the fourth when Gio Urshela hit a two-run homer and Mike Ford added a solo shot five pitches later. The Yankees’ first back-to-back home runs of the year came off Triston McKenzie.

“We needed to win this game,” Cleveland manager Terry Francona said. “Franmil probably won’t lead the league in triples, but when he hits it, he runs. It’s kind of inspiring to me and I hope it is for everybody.”

Taillon allowed four runs in four innings with six strikeouts and no walks, remaining winless since May 1, 2019. Coming back from his second Tommy John surgery, the right-hander has not pitched more than five innings in his four starts and has a 6.23 ERA.

All four hits in the fourth came after Taillon got two strikes in the count.

“All it took today was a string of three or four hitters to ruin our chance of winning the game,” Taillon said.

One of them was Reyes, whose fifth homer of the season landed just beyond the reach of 6-foot-7 right fielder Aaron Judge.

“That was a mistake to Reyes,” New York manager Aaron Boone said. “He just went out and got it.”

DJ LeMahieu, in a 2-for-17 slump, was given the day off by Boone. The reigning AL batting champion has a .260 average with one homer and six RBIs in 19 games.

Giancarlo Stanton had a 120.1 mph single in the first, the hardest-hit ball in the major leagues this season. Stanton and Judge both went 1 for 5 as the Yankees fell to 3-1 on their eight-game road trip.

Yankees: OF Aaron Hicks (back tightness) was held out of the lineup. ... INF/OF Miguel Andújar was activated from the 10-day IL and optioned to the alternate training site.

Indians: RHP Cam Hill (right wrist surgery), a valuable setup man, has been on the injured list since the start of the season.

Yankees: RHP Deivi García will be recalled to start Monday at Baltimore. The 21-year-old made his major league debut on Aug. 30, 2020, against the Mets, finishing the year 3-2 with a 4.98 ERA in six starts. “Going to the alternate site was an opportunity to work on my pitches and add quality with the understanding it would help me when I got back here,” García said. Matt Harvey (1-1, 5.12 ERA) starts for the Orioles.