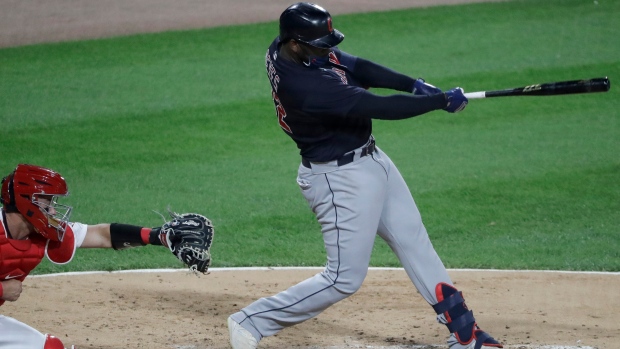 The Cleveland Indians slugger, though, has been facing his cousin for most of his life.

Reyes hit a long home run off Nova, and the Indians beat Detroit for a club-record 18th consecutive time, topping the Tigers 10-5 on Friday night.

“He's been pitching to me since we were kids, so I always know what he's going to be throwing,” Reyes said. “I hit a homer against him last year and I got him again tonight.”

The Indians' previous longest winning streak against one opponent was a 17-game run against the Baltimore Orioles in 1954. The Yankees have beaten the Orioles in their last 18 meetings, with the only longer major league streak being Baltimore's 23-game stretch over the Kansas City Royals that concluded in 1969.

“I didn’t know that we’ve lost that many, but we don’t put that in our mind,” said Detroit's Jeimer Candelario, who had two hits and scored twice. "We’re going to battle, play hard and play to win. That’s all we want right now.

Aaron Civale (2-2) improved to 3-0 in four career starts against the Tigers, allowing four runs, eight hits and a walk in six innings.

“I had all of my pitches tonight, but I never had all of them at the same time,” he said. “I just used what was working each inning and tried to keep us in the game.”

“That's obviously a big concern,” Gardenhire said. “It’s not easy when you go through these things. We have to start getting our starters into the second half of the game again."

The Indians took a 2-0 lead in the second on Reyes' drive over the Indians bullpen and onto the second level of shrubs behind the left-centre field fence.

“I hit one harder than that last year at Wrigley Field, but this was a good one,” Reyes said.

Willi Castro's sacrifice fly made it 2-1 in the bottom of the inning, and Detroit went ahead on Niko Goodrum's two-run homer in the third. Victor Reyes followed with a triple, but Civale retired the next three batters to get out of the inning.

“As soon as the runner got to third, I looked up and Aaron was already on the mound looking for the ball,” Indians manager Terry Francona said. “I knew he was angry, so I knew he was going to be OK. He's a tough kid.”

Cleveland took an 8-3 lead with six runs in the fourth, including five before Nova could get an out. Francisco Lindor singled, Carlos Santana walked and Reyes tied it with a single. After a wild pitch moved the runners to second and third, Santana beat first baseman Candelario's throw to the plate on a ground ball.

Domingo Santana hit Nova's next pitch for a three-run homer to put Cleveland ahead 7-3. Nova got one out in the inning but was removed after Delino DeShields' single. Daniel Norris allowed a base hit to Cesar Hernandez, and DeShields scored on a groundout.

The Tigers got a run in the sixth, but Cleveland's Tyler Naquin made it 10-4 a two-run triple off Kyle Funkhouser in the seventh.

Cameron Maybin hit a solo homer in the ninth for Detroit.

Tigers: Detroit activated Maybin (right quad strain) from the 10-day injured list before the game and optioned OF Travis Demeritte to their alternate training site in Toledo.

Cleveland activated RHP Mike Clevinger and RHP Zach Plesac from the inactive list and optioned them to the alternate training site. Clevinger and Plesac were each put on the list after breaking the team's COVID-19 protocols last weekend in Chicago.

The Indians have been playing at Comerica Park since it opened in 2000, but they were pleasantly surprised by the renovations made to the visiting dugout because of the pandemic.

“This is the first time all season we've been able to have everyone in the dugout, which is great,” Francona said. “That really helps you feel like a team when we're all able to stay together.”