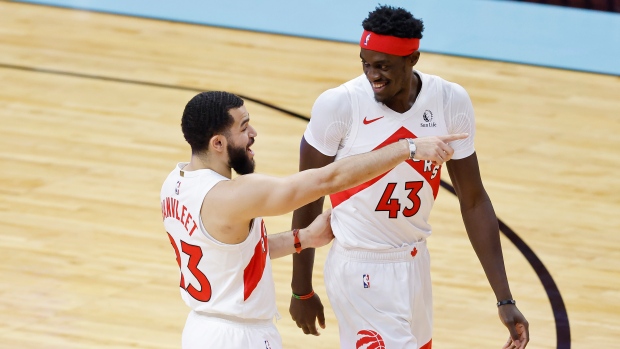 LeBron James now leads the NBA in the latest fan returns for NBA All-Star Voting presented by Tissot, which concludes this Saturday, Jan. 22.

Stephen Curry, Kevin Durant, DeMar DeRozan and James continue to be the top vote-getters at their respective position groups. pic.twitter.com/LBIU5BamC6

VanVleet is averaging a career-best 21.8 points per game on 42.6 per cent from the field and 39.9 per cent from deep. The Rockford, Ill., native was also named Eastern Conference Player of the Week earlier this month after his 37-point triple-double in a win over the Utah Jazz.

VanVleet rose from 10th to eighth from the first to the second round of fan balloting.

In the Western Conference, Canadian Andrew Wiggins continues to hold a spot in the starting lineup, sitting third in fan voting among West forwards. The Toronto native's efficiency has skyrocketed since joining the Warriors and he enters play Thursday shooting a career-best 49.1 per cent from the field and 42.3 from beyond the arc while averaging 18.5 points a night on the second-place Golden State Warriors.

If voting ended today, James, Curry and Wiggins would make up the West's starting lineup alongside Nikola Jokic of the Denver Nuggets and Ja Morant of the Memphis Grizzlies. Kevin Durant, Giannis Antetokounmpo, Joel Embiid, DeMar DeRozan and Trae Young would start for the East.