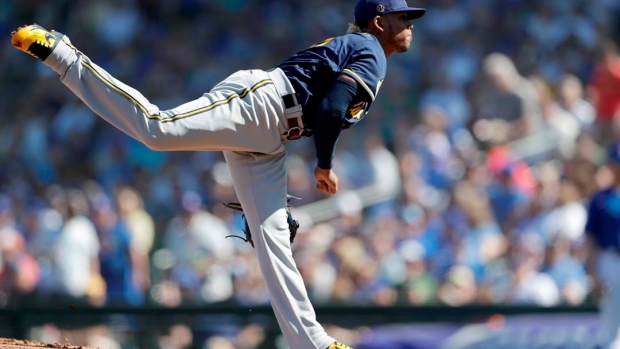 PHOENIX — Milwaukee pitcher Freddy Peralta gets a signing bonus of $1,174,800 as part of his $15.5 million, five-year contract with the Brewers, a deal with two club options that could be worth $30 million over seven seasons.

His deal covers two years of club salary control and his three years of arbitration eligibility. If he turns into a star, the Brewers will have him at far under market value. But for now, he has a contract guaranteeing nearly 30 times the $533,258 he earned last year.

Peralta signed with Seattle in 2013 as a 16-year-old from the Dominican Republic for $137,500. Obtained by Milwaukee from the Mariners in the December 2015 trade that sent first baseman Adam Lind to Seattle, he was 6-2 with a 3.10 ERA in 13 starts for Triple-A Colorado Springs when he was called up to make a spot start in place of Chase Anderson on May 13, 2018.

He went 6-4 with a a 4.25 ERA in 14 starts and two relief appearances for Milwaukee that season and added three scoreless innings against the Los Angeles Dodgers during the playoffs. He began last season in the rotation but was 1-1 with an 8.31 ERA in five outings when he was sent to the bullpen for the first time. He pitched exclusively in relief from mid-June on and finished 7-3 with a 5.29 ERA in eight starts and 31 relief appearances that totalled 85 innings.