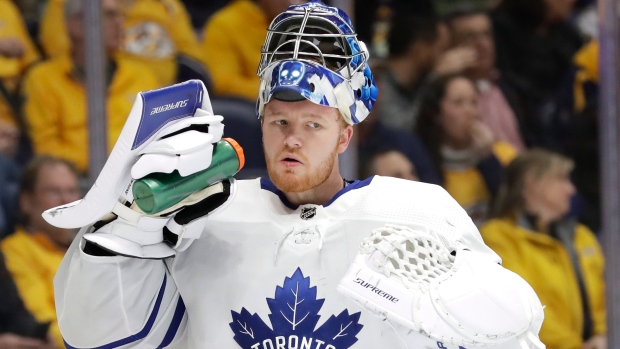 Frederik Andersen takes a break during Monday's game in Nashville. , The Canadian Press

TORONTO – The Maple Leafs are close to getting starting goaltender Frederik Andersen back from the neck injury that has sidelined him since last week, potentially as soon as Tuesday night against the Arizona Coyotes.

“Tomorrow's not ruled out, but we'll see,” Andersen said Monday after skating in his first full practice since the injury. “It's feeling good, [progress] has been positive, been a good process so far. We’re taking the right steps in the right time. It's day-to-day right now, but we'll see. Want to see how it responds later on today.”

Andersen was hurt in the first period of last Monday’s 5-3 loss to the Florida Panthers, absorbing two hard collisions in the opening frame with Mark Pysyk and then Frank Vatrano. The netminder wouldn’t pinpoint which of the hits ultimately caused his injury, acknowledging both were detrimental.

“I don't want to go too much into specifics,” Andersen said. “But definitely got bumped a couple times in that game. I can't tell you which one was the worst, but that's just the nature of the position, I guess.”

That wasn’t the first time Andersen has exited a game for the Leafs after taking a hit to his head and neck area.

Andersen collided with Buffalo's William Carrier during a game in March of 2017 and was pulled by Toronto's medical staff. Then, in the Leafs' penultimate regular-season game that year, Pittsburgh's Tom Sestito smacked into Andersen's head and the goaltender sat out the rest of that contest and the next.

Andersen was cagey Monday when asked whether he’d experienced an injury similar to the one he’s dealing with now.

“It's a neck thing, so I don't want to go into specifics,” he said. “Just making sure that I can play to a level I need to be at, and making sure there's no symptoms. So that's what me and the medical staff have done really [well], being patient and making sure we don't rush anything.”

While Andersen’s continued health is of the utmost importance for Toronto, the team can’t get its starter back in action soon enough.

Andersen has been the Leafs' backbone in net all season, posting a 24-9-6 record, .910 save percentage and 2.87 goals-against average while earning his first selection to the NHL’s All-Star Game last month.

Even a short stretch without Andersen has been difficult for Toronto to weather.

Including last Monday’s defeat, where backup Michael Hutchinson finished the second and third periods, the Leafs have gone 1-2-1 in Andersen’s absence, giving up a total of 15 goals against.

Campbell immediately took over the crease upon arrival, going 1-0-1 with .900 save percentage and 2.87 goals-against average over a weekend set of back-to-back games.

Leafs’ head coach Sheldon Keefe said that while he’s eager to have Andersen back in place on Tuesday, the team will keep its contingency plan in place just in case.

“We're not ruling [Andersen] out,” Keefe said. “And we're going to have both he and [Campbell] be ready. I thought [Andersen] looked good. I know the reports have been really good and he's put in a lot of work here while we were playing last week to get himself back up to speed. He wants to see how things are for the rest of the day today and how he wakes up tomorrow and make a decision then.”

When Andersen has been injured in the past, he’s relied on goaltending coach Steve Briere to provide the right training plans to get him healthy. Rehabbing this neck problem has been no exception, with Andersen getting back on the ice with Briere late last week and allowing the coach to push him as hard as possible right away.

“I think anytime I've been forced to miss time, the process we've been going through with Stevie has been great,” Andersen said. “Just taking the good steps and working [on] step one before you go [to] step two, and just progressing like that in the right direction.”

Given how the injury occurred to his neck, Andersen said he’d like to see the NHL make more of an effort to protect goaltenders – much in the same way the league has addressed dangerous hits against skaters.

“I thought about it a little bit this week, and I think I'm not that confident in [goalie safety],” Andersen said. “They're taking a really good step in putting the onus on players that are hitting another player, especially in a vulnerable position. I think the same can be done to the goalies and making sure that nothing bad like that happens too often.”