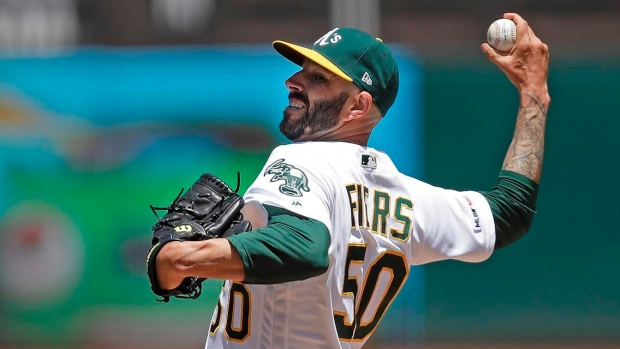 MESA, Ariz. — Oakland Athletics fan K.C. Sandstrom was sitting down the right field line watching his team warm up while armed with a small dry-erase board, a marker and a statement written in all caps.

It's been a tumultuous few months for Fiers, the current A's pitcher and former Houston player who helped expose the Astros' sign-stealing scandal that's rocked Major League Baseball. But on a cool Sunday in Arizona, the 34-year-old received a largely warm reception during his first spring training appearance in Mesa.

“Oakland's going to support us no matter what," Fiers said after throwing two perfect innings against San Francisco. “They've always been there. It's fun, it's fun playing in front of these fans and with these guys. Just a great day of baseball.”

While Fiers is now widely known for his connection to the Astros' sign-stealing, he's also an accomplished pitcher. He's thrown two no-hitters over nine seasons and is coming off his best year in the big leagues — he finished with a 15-4 record and 3.90 ERA in a career-high 184 2/3 innings in 2019.

He's expected to have a prominent role on this year's staff as well.

The right-hander had a good start to spring, retiring all six of the Giants he faced. When the Oakland lineup was announced before the game, he received loud cheers from the A's side of the stadium. The Giants' side was a little less enthusiastic, but certainly not hostile.

“Overall, a good day,” Fiers said. “I was able to throw strikes, I was able to put balls where I wanted to and threw all my pitches.”

Baseball's biggest scandal in years began in November after Fiers detailed to The Athletic about how the Astros used electronics to illicitly steal signs from opposing catchers during their World Series-winning season in 2017. Fiers pitched three seasons for the Astros, including 2017.

The fallout — for the Astros, Fiers and the entire sport — has been even more intense than many anticipated.

An MLB investigation led to a season-long suspension for Houston's general manager Jeff Luhnow and manager AJ Hinch and both were fired by Astros owner Jim Crane. Boston Red Sox manager Alex Cora and New York Mets manager Carlos Beltrán — who were both part of the Astros in 2017 — were also fired by their respective teams.

No players were disciplined, but the Astros have received a torrent of criticism from stars such as Mike Trout, Cody Bellinger and Aaron Judge, and fans all over.

Houston outfielder Josh Reddick said on Friday that he and other players have even received death threats in response to the scandal. Fiers said he'd also gotten them.

The Astros were met with a hostile reception during their spring training opener against the Washington Nationals on Saturday. Fiers avoided the same kind of response on Sunday in front of a friendly crowd.

Fiers' role as the whistleblower in the Astros' scandal has been met with both praise and criticism. Commissioner Rob Manfred said on Tuesday that the sport would "take every possible step to protect Mike Fiers wherever he's playing, whether it's in Houston or somewhere else” and added that “Mike did the industry a service."

Others haven't been as complimentary. Former Boston Red Sox slugger David Ortiz said Fiers was “looking like a snitch” for disclosing the team's cheating scandal only after he had left the team.

Fiers said everyone is entitled to their opinion and he wasn't concerned.

“It's all about going out there and playing baseball for everybody," Fiers said. “Every team's trying to get back out there, play the game we love and compete. The rest will take care of itself.”

Elsewhere in the Grapefruit and Cactus leagues:

Kevin Newman singled and scored a run for Pittsburgh's split squad. Trevor Williams struggled in his first start, giving up four runs on four hits and a walk in two innings.

Before the game, the Phillies unveiled the new-look Phanatic. The mascot got a makeover this year amid a legal fight between the team and his creators. The Phanatic now features includes flightless feathers rather than fur-colored arms, stars outlining the eyes, a larger posterior and a powder blue tail, blue socks with red shoes, plus scales under the arms.

JaCoby Jones led off the game with a home run for Detroit's split squad. Riley Greene, a 19-year-old who was the fifth overall pick in the 2019 draft and is the Tigers' top hitting prospect, hit a solo home run and walked twice.

Jordy Mercer had a two-run single for Detroit. Kody Clemens singled and drove in a run. Ivan Nova got the start, surrendering two hits in two scoreless innings.

Freddie Freeman had a sacrifice fly to drive in Atlanta's run.

Asdrubal Cabrera had a sacrifice fly and Brandon Snyder had two hits, driving in the winning run with a single in the bottom of the ninth for Washington's split squad.

Matt Kemp had a run-scoring single for Miami. Top 5 prospects Monte Harrison and Jazz Chisholm drove in runs in a four-run eighth inning. Elieser Hernandez allowed a run on a hit batter and a walk, pitching two innings in his first start.

Mike Zunino had an RBI single and starter Ryan Yarbrough tossed a scoreless inning for Tampa Bay. Japanese-born Yoshitomo Tsutsugo, who is penciled in as the designated hitter, singled and walked in his first appearance.

Miguel Andujar had a solo home run for New York. Andujar didn't play after mid-May last season because of a shoulder injury.

Dwight Smith Jr. had two hits, driving in a run for Baltimore. Rio Ruiz added a run-scoring single. Wade LeBlanc got the start, allowing one hit in two shutout innings with two strikeouts.

Kevin Plawecki had an RBI single for Boston. Top 5 prospect Jeter Downs, who was acquired when the Red Sox sent Mookie Betts and David Price to the Dodgers, went 0 for 3 in his first action.

Former AL MVP Mookie Betts flied out twice before adding a fifth-inning sacrifice fly in his debut with Los Angeles. Alex Wood started, giving up a hit in a scoreless inning while striking out two. Corey Seager went 1 for 3 in his spring debut.

Joey Rickard had two hits, including a double, driving in a run for San Francisco. Andrew Suarez got the start, pitching two shutout innings and allowing a hit and a walk with two strikeouts.

Ketel Marte, who homered, Jon Jay and Nick Ahmed each had two hits for Arizona. Robbie Ray struck out three and walked two while retiring five batters in a scoreless start.

Tim Anderson had an RBI single and James McCann doubled and scored a run for Chicago. Dylan Cease pitched two shutout innings in a start, allowing three hits while striking out three.

Kansas City catcher Salvador Perez went 1 for 3 after being injured all last season.

Brett Anderson allowed two runs — one earned — on two hits and a walk, pitching one inning in a start for Milwaukee.

Los Angeles prospect Jo Adell had two hits, drove in a run and stole a base.

Nolan Arenado had a sacrifice fly and Elias Diaz doubled and scored for Colorado. Eric Stamets added a three-run homer.

Newcomer Todd Frazier had two hits, including a double, in his debut with Texas. Joey Gallo doubled, scoring a run.

Yusei Kikuchi struggled in a start for Seattle, surrendering three runs — two earned — on four hits and a walk while retiring four batters. Shed Long Jr. doubled in a run and Kyle Seager picked up his first spring hit.