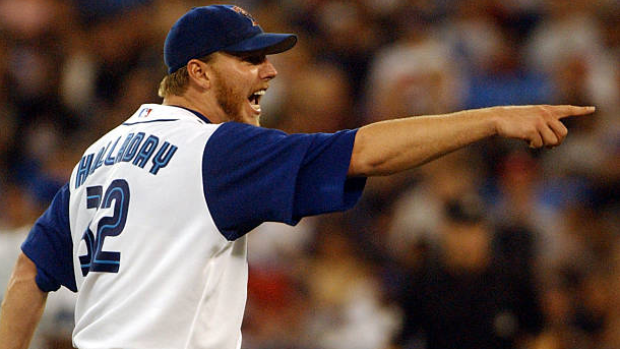 TORONTO — Even in his day, Roy Halladay was a rare breed.

In today’s game, with a completely different way of managing pitching staffs, workloads, and sport science now playing a huge role, the days of 250-inning horses atop a rotation are essentially over.

Some context: Halladay threw 220-plus innings eight times in his career, finishing what he started an amazing 67 times overall, including 49 complete games in 12 seasons with the Toronto Blue Jays.

In 2019, just 15 pitchers in baseball eclipsed the 200-inning mark, while Justin Verlander, the closest thing there is to a Halladay type these days, led baseball with 223 frames.

Seven separate times in his career, Halladay registered at least five complete games in a season, including a career-high nine on three occasions from 2008-10.

Since the start of the 2017 season, Jays starters have recorded just two true complete games in 486 tries, with both coming from the now-departed Marcus Stroman.

If you add up the Blue Jays’ compete games from the entire decade we just left, 10 different starters combined for 33 complete games over 10 seasons, still leaving that group well back of the accomplishments of one man.

Former Jays GM Gord Ash, who drafted Halladay back in 1995, answers with a quick “not a chance” when asked if we’ll ever see something similar.

“I think that complete game aspect that I know he was always proud of was a direct result of his competitive nature — he never wanted to come out of a game,” Ash said.

It is what defined Roy Halladay.

As well as an uncanny ability to finish what he started.

Ahead of TSN airing E:60’s Imperfect: The Roy Halladay Story on Friday at 7 p.m. ET on TSN 1,3 and 4, here’s a look at 10 important moments that helped land the ace in Cooperstown.

The Blue Jays laid eyes on Halladay for the first time about two months before the 1995 draft, one led by University of Nebraska two-sport star Darin Erstad, high school catcher Ben Davis, an outfielder Jays fans would come to know well in Jose Cruz Jr., and a prep right-hander named Kerry Wood.

Halladay, coming from cold-weather Colorado, was unsurprisingly available for general manager Gord Ash and scouting director Tim Wilken to snap up with the 17th pick.

“There's a lot of teams at that time that weren't willing to take high school pitchers in the first round, even though Kerry Wood was in the same draft," Wilken told MLB.com of the 1995 draft and Wood, the fourth-overall pick. “There was controversy about Roy having a one-piece arm action, which is like a vertical arm without a bend in it. I thought there was enough movement or bend in his arm where he could manipulate — he had a knuckle-curve at the time. People didn't know how to grade a knuckle-curve because not many people had thrown it.”

Of the 14 pitchers selected in the first round that year, only Halladay, Wood, Matt Morris (12th to the St. Louis Cardinals) and Mark Redman (13th to the Minnesota Twins) had any sort of impact, with Doc’s Cooperstown career leading the way by far.

After two-and-a-half seasons in the minors, Halladay opened the 1998 campaign at Triple-A Syracuse as Baseball America’s No. 38 overall prospect.

Halladay did not disappoint, going 9-5 with the SkyChiefs and pitching to a 3.79 ERA across 21 starts as a 21-year-old, close to six years off the average age of the International League circuit that year.

The performance earned Halladay a call to the big leagues in September, where he allowed a pair of earned runs across five innings in his debut on the road in Tampa.

His second turn, though, was a thing of beauty, as Halladay twirled 8.2 memorable no-hit innings in front of the home crowd against the Detroit Tigers, before pinch hitter Bobby Higginson soured things with a solo home run to left field.

It led to huge expectations for the big right-hander heading into 1999.

By now you know about how things fell apart for Halladay in the years following the lost no-no bid, and a 10.64 ERA in 2000 led to a journey back to class-A ball in an effort to rebuild his delivery to start 2001.

By the end of that season, the 24-year-old had worked his way back to being a reliable rotation option for the Blue Jays, but expectations were now tempered for the former top prospect.

Then Halladay went and got everyone excited again with the way he finished out 2001.

After six weeks of mostly up-and-down performance after he was summoned from the minors in July, Halladay allowed five earned runs in an Aug. 12 road start against the Anaheim Angels.

Halladay would dazzle the rest of the way, never giving up more than three earned runs in any of his nine starts, registering a 1.98 ERA and .206 batting average against.

It was capped by a complete game, two-hit shutout — with no walks and eight punchouts for good measure — of the Cleveland Indians on Oct. 5.

He’d carry that momentum into the 2002 campaign.

Anyone wondering about the legitimacy of Halladay’s finish the previous season had those doubts quickly erased in the second game out of the gates — Kelvim Escobar took the ball opening day — when Doc needed only 94 pitches to spin eight innings of one-run ball in a win over the Minnesota Twins.

Pitching deep into games was becoming Halladay’s thing, and a 9-4 record with a 3.06 ERA in his first 18 starts earned him his first trip to the All-Star Game, the infamous 7-7 tie at Miller Park in Milwaukee.

It didn’t faze him.

Coming out of the break, Halladay would go on a three-start run that saw him shut out the Boston Red Sox for eight innings, allow one run over eight to the Baltimore Orioles, and then hold the O’s to just one run over seven innings five days later.

It marked the start of a Hall-of-Fame prime.

If you’re feeling the need to point out Halladay’s best season as a Blue Jay, 2003 is probably it, although ’02 and ’09 come close.

Most impressive is the career-high 266 innings Halladay logged that year, leading to a 22-7 record across 36 starts for the Jays’ horse.

While he allowed 253 hits, Halladay threw nine compete games — the first of six times in his career he’d go the distance at least seven times in a season — and finished with a 3.25 ERA.

Halladay would walk away with his first American League Cy Young Award in November when BBWAA voters gave him 26 of 28 first-place shares.

It ended up being the only Cy that Halladay would win a Jays uniform, before he added the National League award to his resume in 2010.

Whether it was his memorable moments with the Blue Jays or his perfect game and postseason no-hitter with the Phillies, Roy Halladay had some incredible achievements in his career, SportsCentre looks back at a few of them in the SC Timeline.

Going into his 12th season in Toronto, Halladay was already a Blue Jays legend, but the club had been treading water for his entire tenure and the winds of change were starting to blow.

With contending teams calling on a regular basis about his availability and Halladay, himself, already knowing that it would be his Blue Jays swan song, Doc dazzled down the stretch.

On Sept. 4, he threw a complete-game shutout at home against the New York Yankees, allowing only one hit.

Five days later, another complete game, this time against the Twins.

Then, after allowing two earned runs apiece in a pair of starts against the Yanks and Rays, Halladay put an exclamation point on things, with back-to-back complete-game shutouts in his final two starts as a Jay.

All told, Halladay authored a 1.47 ERA over 49 innings to close out his Toronto chapter.

The days of Halladay re-upping in Toronto at bargain rates — the ace signed a pair of $40-million extensions, one prior to 2004 and one heading into 2006 — were over.

Halladay wanted to win and everyone knew it.

And who could blame him?

He also had a no-trade clause that would give him some leverage when he finally wanted out.

So in mid-December, a couple weeks away from the calendar flipping into a new decade, Blue Jays GM Alex Anthopoulos turned the page, shipping Halladay off to the Philadelphia Phillies in exchange for a package of three prospects in Kyle Drabek, Travis d’Arnaud and Michael Taylor.

It was the end of a 2,046.2-inning era, one that did not include a postseason appearance.

Many transactions later, the final Jays connection to this trade ended up being Devon Travis, who was released late last year.

After escaping mediocrity in Toronto and signing a lucrative $60 million extension in December, Doc rolled into the new year and the City of Brotherly Love and didn’t skip a beat.

Not only did he post a pristine 2.44 ERA, win 21 games and add the National League Cy Young Award to his trophy case, he also garnered MVP votes for the first time in his career with the first place Phillies, something he never had the opportunity to do over a decade-plus in Toronto.

Halladay is one of six pitchers to win a Cy Young in both leagues, joining Gaylord Perry, Pedro Martinez, Randy Johnson, Roger Clemens and Max Scherzer.

But on May 29, a night game in Miami, Halladay joined another illustrious club when he spun the 20th perfect game in MLB history, blanking the Marlins 1-0 with an unblemished box score.

As was usually the case when Halladay was on — and that was often — Doc needed just 115 efficient pitches, throwing 72 strikes and punching out 11 batters.

There have been three perfect games since, all of them coming during the 2012 season.

If you want to point out a moment when most of baseball said, ‘Yep, that’s a first ballot hall of famer,’ this night in Miami was it.

Walking to the mound at the age of 33 for his first postseason start, it was fair to wonder how Doc would perform on the biggest stage baseball has to offer.

After all, many a future hall of famer had struggled to transfer regular-season dominance over to the second season.

It was not an issue for Halladay.

Throwing Game 1 of the NLDS against the Cincinnati Reds, Halladay was staked to an early 4-0 lead after two innings, and it ended up being more than enough cushion.

If it weren’t for a fifth-inning walk to Jay Bruce, we might be talking about the only man to ever throw two perfect games.

The second no-hitter in postseason history is a pretty good consolation prize, and the Phillies would cruise to a sweep of the Reds, before falling to the San Francisco Giants in the NLCS.

“It's surreal, it really is,” Halladay told reporters after the game. “I just wanted to pitch here, to pitch in the postseason. To go out and have a game like that, it's a dream come true.”

Halladay’s official bio will say he retired on Dec. 9, 2013, as a Toronto Blue Jay on a one-day contract, but the unofficial end came in 2011.

At the age of 34, coming off a Cy Young season in his first with Philly and riding a streak of five years of 220-plus innings, Halladay looked as good as ever.

All the evidence you need of that is the fact he was able to post a career-best 2.35 ERA in his 14th big-league season, compiling another 233.2 innings despite all the mileage on his arm and a lengthy playoff run the previous fall.

In 32 starts, Doc threw eight more complete games to run his career total to 66, and he’d throw just one more before retiring.

From here, shoulder and back injuries took a major toll – maybe more than we even knew – and Halladay would pitch to a 5.15 ERA over the final two injury-shortened seasons of his career.​