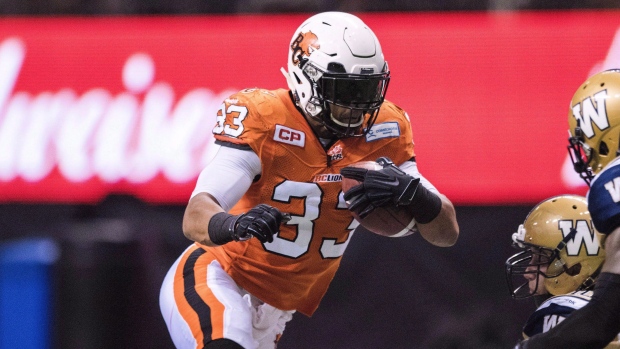 SURREY, B.C. - Andrew Harris sounded a lot like a player with one foot already out the door.

The B.C. Lions said their farewells on Monday, less than 24 hours after getting thumped 35-9 by the Calgary Stampeders in the CFL's West Division semifinal, and the club's star running back was blunt in his assessment of a roller-coaster campaign that ended with a thud.

"There's been times where I've felt the amount of effort and things I've put into this club ... hasn't been reflected the same way back to me," said Harris. "That's been frustrating."

Set to become a free agent this winter, the 28-year-old avoided the question when asked if he wanted to return.

"At this point I'm just going to enjoy the off-season and get some Andrew time and reassess where I want to be," said the Winnipeg native. "I just want to be somewhere I'm happy. I'm near the end of my career now, so there are some different factors that come into play with that."

Those factors include family and his business ventures outside of football, but it's clear his role on the field is critical.

"I bleed orange," he said. "It's been a great journey, but the writing's kind of on the wall. At this point in time I just don't know what's going to happen."

Harris' up-and-down season mirrored that of the Lions and their 7-11 record. He finished with 1,039 yards on the ground, good for second in the league, but was also ignored for stretches under first-year head coach Jeff Tedford and offensive co-ordinator George Cortez, including one particular loss where he rushed four times for just three yards.

"You always set goals and you always set a certain standard," said Harris, who wound up with a CFL-best 1,523 yards from scrimmage. "You want to be consistent, you want to be at the top of the game throughout the full season and that didn't happen this year. Ultimately that was the biggest disappointment."

Tedford said it was no secret that Harris was frustrated, but added his running back rushed the ball 42 more times than the next nearest player in the league.

"He had his opportunities and had a good year as far as stats were concerned," said the coach. "I think he did a good job, but whatever his future is, I'm not sure of right now."

Another question heading into the off-season for B.C. is the status of impending free-agent quarterback Travis Lulay.

A member of the Lions since 2009, Lulay entered training camp as the starter after two straight years cut short by shoulder injuries, but hurt his knee in September and lost the No. 1 job to rookie Jonathon Jennings.

Lulay was the CFL's Most Outstanding Player in 2011 when the Lions won the Grey Cup — their last playoff victory — but the game has taken its toll and he didn't seem to have the same zip on his passes prior to getting injured this season.

"There's not a lot of guarantees in this line of work, but it is guaranteed that's it's going to be different in this locker-room when the B.C. Lions go to training camp in 2016," said the 32-year-old from Salem, Ore. "How much change remains to be seen."

And while Tedford said Jennings is the starter as it stands now, Lulay was adamant he has a lot to offer.

"I feel I still have some good football left in me," he said. "Being on the field and playing is why we play the game. I still have that bug."

Note: Wide receiver Emmanuel Arceneaux and offensive lineman Jovan Olafioye, both internationals, are among the other big names on the Lions' roster set to become free agents.