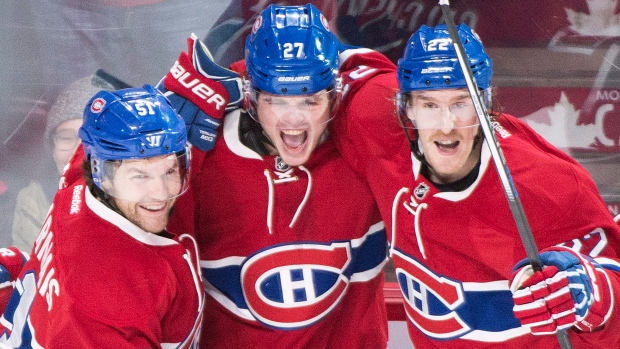 MONTREAL - The Montreal Canadiens continued their dominance over the New York Islanders but lost forward Brendan Gallagher to injury in the process.

Montreal beat the visiting Isles 4-2 on Sunday in the second game of their home-and-home series, the team's sixth straight win against New York.

The victory, however, was overshadowed by Gallagher's injury.

The 23-year-old left the game midway through the second period after blocking a slap shot by Johnny Boychuck. Gallagher tried to play through the pain but retreated to the dressing room and did not return.

Coach Michel Therrien confirmed Gallagher fractured two fingers on his left hand. He will undergo surgery on Monday and is out indefinitely.

"He's a guy that shows up every night," said captain Max Pacioretty of his linemate. "To see that happen, the way it happened, it shows the type of warrior he is. It's tough playing without him. We hope for the best. We need him.

"He stayed out there in that shift and it says a lot about his personality and his character."

"He's a big leader on this team," said Alex Galchenyuk, who scored the game winner late in the third period. "The way he plays, he contributes a lot. He blocks shots, he's a warrior out there. It's unfortunate to see him go down like that."

After missing two chances earlier in the game, Galchenyuk broke a 2-2 deadlock at 16:31 of the third to give Montreal the late lead. With the Habs on the power play, Galchenyuk beat Thomas Greiss with a one-timer glove side on a cross-rink pass by P.K. Subban.

The goal was Galchenyuk's first in 11 games and just his third of the season.

"It was one of the best feelings, especially when you haven't scored in a while," he said. "You try to stay positive and work hard. The last couple of games I worked on my game more and got more shots. I knew it was coming."

The Canadiens finished 3-for-5 with the man advantage.

Back from injury, Carey Price made 21 saves in his first start at home since Oct. 24.

Captain John Tavares and Anders Lee scored for the Islanders (10-8-3) while Greiss stopped 23-of-26 shots in defeat.

Tavares opened the scoring with an easy tap-in at 18:41 of the first before Desharnais netted the equalizer on the power play at the 9:37 of the second period.

Fleischmann gave the home team the lead on a great individual play at 14:09 of the second. With Montreal playing shorthanded, Fleischmann stole the puck from Kyle Okposo at the blue line and fired home his seventh of the season while on a 2-on-0 breakaway with Lars Eller.

"I saw Larry coming with me (on the breakaway) but I didn't know if he was open or not so I kept it and shot it blocker," said Fleischmann. "I saw a guy back-checking too so I wasn't sure if I gave it to him, if he was going to knock it off so I just kept it."

The Canadiens now lead the NHL with five short-handed goals.

Recalled from the AHL's St. John's IceCaps, 22-year-old Sven Andrighetto made his season debut. The speedy forward finished the game with 10:32 of ice time.

Notes: Pacioretty earned his 300th career point. … Price improved to 9-2-0 on the season. He is now 11-3-3 all time versus the Isles. … Montreal forwards Devante Smith-Pelly (lower body) and Torrey Mitchell (lower body) were not in the lineup.