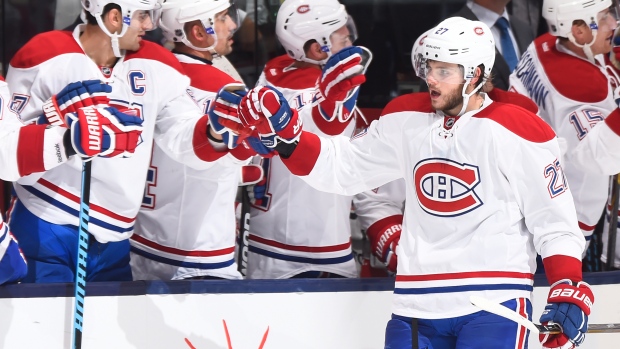 With the puck bouncing in front of him, Alex Galchenyuk steadied it and fired past Toronto goaltender Jonathan Bernier for the game-winning goal in the Montreal Canadiens' opener.

Galchenyuk was opportunistic on that play, and the team is counting on him seizing opportunity in his first NHL season as a full-time centre. The shift to the middle paid immediate dividends with a strong all-around performance.

"(Wednesday night) was a perfect example of him just maturing," defenceman P.K. Subban said. "You can see the game, pucks bouncing all over the place and he just stuck with it, just with it, stuck with it and he finally got rewarded for it. You've got to give him some credit. He's learning."

Galchenyuk should settle in for a roller-coaster season because this time the Canadiens aren't letting him off the ride. In his three previous seasons, they experimented with him at centre but moved him back to wing when things went wrong.

Those days are over.

"We all believe that after three years, he's ready for that challenge," coach Michel Therrien said. "He's going to be a centreman. He's going to go through tough times, and it's normal. I'm expecting that. But the plan for him, we want him to be a centreman, we're ready to be patient with him."

Galchenyuk opened the year centring Lars Eller and Alexander Semin, and there's no reason to believe that'll be any different Saturday night when the Habs visit the arch-rival Boston Bruins. It'll be just another step in his progression.

Over the summer, the 21-year-old prepared for this move, working on his shot and on faceoffs. But he found out against the Toronto Maple Leafs that in-game practice is what really makes perfect.

"I didn't take them as much in the last couple years," said Galchenyuk, who won seven of his 10 draws. "I only get better by repetition and taking faceoffs."

Galchenyuk's shot was on point, hitting the post once and sniping a wrist shot for his goal. He has been in the NHL long enough to know that the key is getting the shot off quickly.

Generating offence isn't Galchenyuk's problem, though, so he spent opening night making sure his work down low in the defensive end was solid. Being a centre means greater responsibility there.

"I know offence is one of my strengths but I can't really just rely on that," Galchenyuk said. "You've got to make sure you're reliable offensively and defensively and I thought I did pretty well. There's still obviously a lot of things I can improve on, but I'm focused and I'm doing this right."

The Habs are committed to that, too. Therrien likes Galchenyuk's progression as a professional and he was impressed by his play in the pre-season.

Subban is excited for Galchenyuk's potential.

But Therrien and Subban are also quick to point out that, even though Galchenyuk has almost 200 regular-season games under his belt, he's still very much a kid by league standards.

"People can't forget his age, how young he is. He's unbelievable for his age," Subban said. "For Alex, he just has to continue to focus on getting better every day, and as long as he has that mentality he'll be fine."