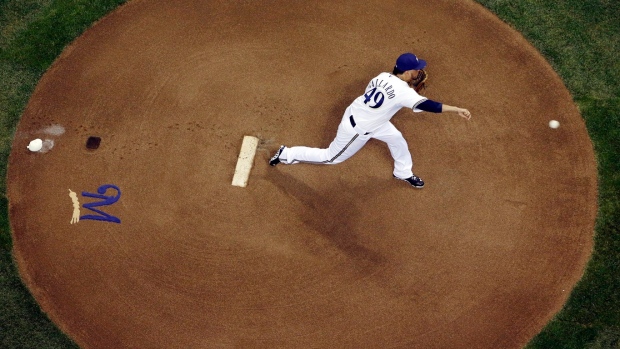 Unbeaten over his last four starts, Yovani Gallardo has a chance to not only defeat the Colorado Rockies for the first time in his career, but help the Milwaukee Brewers complete a sweep of this four-game series.

Gallardo gets the call Sunday afternoon and last started on Tuesday versus Washington, posting a no-decision in the 4-2, 16-inning loss. He is 2-0 with a 1.00 ERA over his last four starts. The right-hander is 0-4 with a 5.77 ERA in nine career games (eight starts) against the Rockies.

The Brewers are 6-0 this year against the Rockies and today can complete their first season series sweep of Colorado.

Jorge De La Rosa tries to prevent that from happening when he toes the rubber for the Rockies. The lefty, who began his major league career with the Brewers, is 1-2 with an 8.06 ERA in six games (five starts) against today's opponent.

De La Rosa snapped a personal 0-3 skid over four starts with a win against St. Louis on Tuesday when he allowed nine hits and five runs -- four earned -- over seven innings.

Yesterday, Ryan Braun drove in two runs with a triple and scored twice in Milwaukee's 7-4 win. Carlos Gomez, who left the game in the seventh inning with a strain on the left side of the neck, hit a three-run homer for the Brewers. Shortstop Jean Segura left early due to cramping in his left quadriceps.

"With the next day and off day it really helps," Brewers manager Ron Roenicke said referring to having Gomez and Segura rest Monday prior to the start of a two-game set in Toronto.

Starter Matt Garza (5-5) earned the win after giving up four runs on nine hits with four strikeouts in 6 2/3 innings of work.

D.J. LeMahieu brought in two runs with a seventh-inning single and Drew Stubbs supplied three hits and an RBI for Colorado, which has dropped 11 of its last 12 games. The Rockies have dropped six in a row on the road.

Jhoulys Chacin (1-7) lost his third straight start after giving up all seven runs on 11 hits across 5 2/3 frames.

"The pattern has been that he needs some time to settle into the game," said Rockies manager Walt Weiss. "The early damage hurt."