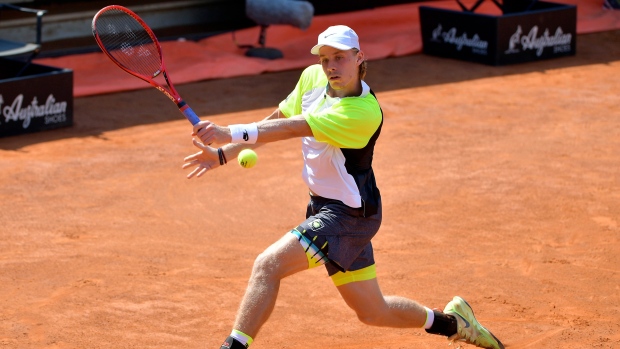 TSN's Michael Gallo gets you set for the French Open with a look at five Canadian storylines heading into Roland Garros.

Canada's newest member of the top-10, Denis Shapovalov, is having an incredible season since tennis returned from hiatus. A first major quarter-final at the US Open and then a semifinal appearance in Rome last week propelled him up the rankings becoming the second ever Canadian men’s player to reach that milestone. Wins in the Italian capital over the rising Ugo Humbert and Grigor Dimitrov sent him to the final four where he was narrowly defeated in a third set tiebreak by Diego Schwartzman. A favourable draw for Shapovalov has Sports Illustrated's John Wertheim picking him to make the semis in Paris. He'll start off against Frenchman Gilles Simon and is also in a section that includes Dimitrov and Stefanos Tsitsipas.

Not quite the clay results Felix Auger-Aliassime was hoping for heading into Roland Garros. An opening round loss to Filip Krajinovic in Rome followed by a second-round upset loss to Alexander Bublik has the Canadian sporting a 1-2 record on clay since his run at the US Open. Just last year, the 20-year old made two ATP finals on clay and looked destined for a deep run in Paris before picking up an injury just days before the tournament began. A year later, he makes his much-anticipated Roland Garros main draw debut, the same site he lost a heartbreaking junior final at back in 2016. It's a very tough draw for Auger-Aliassime as he opens up against Yoshihito Nishioka and could face either Stan Wawrinka or Andy Murray in round three. The section also includes US Open champion Dominic Thiem, who would likely be looming in the Round of 16.

Genie Bouchard is enjoying somewhat of a renaissance in 2020 which is bringing back some fond memories of her grand slam success more than five years ago. Bouchard's ranking dipped all the way to No. 330 in August, but she improved that significantly by making the quarter-finals in Prague and an impressive result in Istanbul where she made her seventh career WTA final (and first since March of 2016). What was even more impressive about her run in Turkey is that she had to go through qualifying and won six matches in six days, upsetting the No. 1 seed Svetlana Kuznetsova along the way. Bouchard's ranking skyrocketed all the way up to No. 168 in the world as she heads into her first grand slam appearance in over a year. The French Tennis Federation rewarded Bouchard with a main draw wildcard as her ranking was not high enough to even get into qualifying at the cut-off date last month. She faces No. 100 Anna Kalinskaya in the first round.

4. Fernandez ready for the next step

Leylah Fernandez played just one tournament between the US Open and Roland Garros, dropping her first-round qualifying match in Rome as she prepared for her grand slam debut in Paris. Last year's French Open junior champion went pro right after her title and has moved up 271 spots in the 14 months since. Fernandez is coming off her first ever grand slam main draw win in New York where she beat Vera Zvonareva which propelled her into the WTA top-100 for the first time. The 18-year old has a winnable first-round match against the No. 31 seed Magda Linette and there is some opportunity to make a splash in her section of the draw.

5. No pleasure in Paris

It's no secret that Vasek Pospisil has struggled in Paris over his career. Six losses in six appearances leaves little hope that the Canadian can make a similar run at Roland Garros as he did at the US Open. To make matters worse, Pospisil was drawn the hardest first round matchup of any Canadian as he faces the No. 7 seed Matteo Berrettini. The 30-year old is playing arguably the best tennis of his career so perhaps he may be able to pull off another big upset in 2020. A worthy mention also goes to Steven Diez from Toronto, who makes his grand slam debut after a successful qualifying week. He takes on American Mackenzie McDonald in the first round.