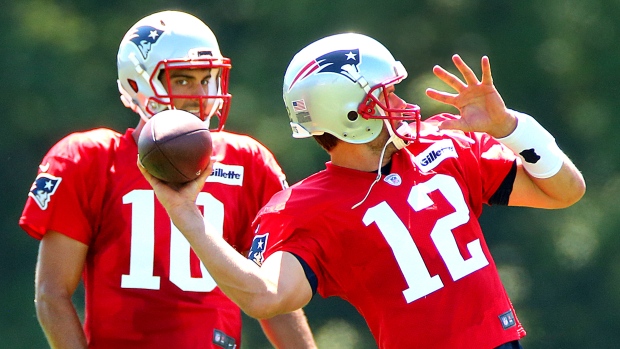 Jimmy Garoppolo and Tom Brady when they were teammates, circa 2016. , Boston Globe/Boston Globe/Getty Images

There are no easy wins in the National Football League.

Sixty-nine of the first 106 games of the 2019 NFL season have had a team come within one possession of tying or taking the lead in the fourth quarter, which translates to a 65.1 per cent share.

Fifty-four of those games have been decided by one score.

Nine games have been decided by one point – the second-most through seven weeks of a season since 1970.

Most football fans have probably heard the ‘no easy wins’ line before.

It’s more than just a cliché as the season approaches its halfway mark.

Mic’d up during a 34-33 win over the Atlanta Falcons in Week 6, Murray turned to his teammate Brett Hundley and said, “this (expletive) is hard.”

Later on in the game, the mic picked up Murray telling safety Chris Banjo, “it’s like, never really over – you know what I’m saying?”

It certainly wasn’t the worst thing a microphone has picked up a young quarterback saying this season.

Plus, Murray was absolutely right.

The rookie first-overall pick has led Arizona to three straight victories, including a 27-21 win over fellow rookie Daniel Jones and the New York Giants in Week 7.

The Cardinals offence has averaged 29.0 points and 400.3 yards over that span.

Still, Arizona’s average margin of victory in those games was just 3.3 points.

It won’t get any easier for Murray this season either.

The Cardinals still have to play the undefeated San Francisco 49ers and the reigning NFC champion Los Angeles Rams twice each.

Factor in road trips to New Orleans, Tampa Bay and Seattle and there is bound to be some adversity along the way.

Murray has the potential to be special.

A gruelling schedule should force some setbacks in the short term.

Considering how small the margin of error has been, you might expect the 49ers and New England Patriots would be applauded as the league’s lone two remaining undefeated teams.

Instead, it seems like their perfect starts have been somewhat glossed over and deemphasized.

After all, who have they REALLY beaten?

The Patriots are 7-0 for the third time in franchise history.

Their opponents that have gone 11-20 combined if we ignore their losses to New England.

But, what if we take it back even further?

Technically, the Patriots have recorded 12 straight wins dating back to last season.

Three of those wins were against the Rams, Kansas City Chiefs and Los Angeles Chargers during their Super Bowl run – three opponents with a combined 37-10 record if we ignore losses to New England.

Suddenly, it’s much tougher to ignore their current run.

Well, their plus-175 point differential is the second-highest in NFL history through seven games.

The Buffalo Americans are the only team to register a better mark.

The changes New England made on defence have worked out so far.

The Patriots bulked up their pass rush with the additions of Jamie Collins, Michael Bennett and rookie Chase Winovich in the off-season.

Collins leads the team with 4.5 sacks.

Winovich is second with four.

New England’s defence has allowed just 3.7 points per game – an absolutely absurd number regardless of who they have played.

What about their offence?

The Patriots also lost Trent Brown to free agency, before centre David Andrews and tackle Isaiah Wynn were both sidelined.

Wide receiver Josh Gordon’s time with the franchise came to an abrupt end on Wednesday.

Julian Edelman and Phillip Dorsett have been banged up.

Still, the Patriots have scored an NFL-best 31.9 points per game.

They just added Muhamed Sanu in a trade from the Atlanta Falcons.

Rookie first-round pick N’Keal Harry is set to join the team once he’s eligible to come off the IR in Week 8.

As long as they stay healthy, this offence can do more than enough to compete with anybody.

In Week 8, New England will host the Cleveland Browns.

A measure of their success can be linked to their schedule.

Still, it might make sense to give Tom Brady and company at least some of the credit for their historically dominant start.

San Francisco’s offence hasn’t produced at the same level as the undefeated team from the AFC this season.

Then again, they haven’t needed to.

The 49ers have held each of their last three opponents to under 200 total yards of offence.

The NFL record for the most consecutive games without allowing an opponent to gain at least 200 yards of offence is five – set by the 1974-75 Pittsburgh Steelers.

San Francisco has allowed just 223.5 total net yards per game – more than 100 yards fewer than the next best NFC team in that department.

Meanwhile, it seems as though Jimmy Garoppolo has become an easy target for critics that have insinuated he could be the “weak link” on this roster.

After all, he’s averaged just 219.0 passing yards per game with a 7/6 TD/INT ratio through six wins.

Garoppolo needs to cut down on the turnovers.

At the same time, a big part of the reason why Garoppolo’s yardage isn’t as high as some of the other young quarterbacks around the league is because San Francisco has averaged an NFC-best 172.7 rushing yards per game.

The addition of wide receiver Emmanuel Sanders in a trade with the Denver Broncos should provide an element that the 49ers offence didn’t have before they made the deal.

Garoppolo is now 14-2 as a starter in his career.

At the very least, he’s earned the opportunity to prove he can guide the 49ers to a Super Bowl.

Their non-divisional slate includes the Panthers, Packers, Ravens and Saints.

Simply put, the NFC West is the best division in football.

In order to win it, the 49ers might need to beat an additional four non-division opponents that are currently in the playoff picture in their respective conferences.

A lot can change over the second half of the season.

At the same time, maybe the 49ers and Patriots deserve credit for the way they have taken care of business throughout the first seven weeks of the season.

After all, there are no easy wins in the NFL.