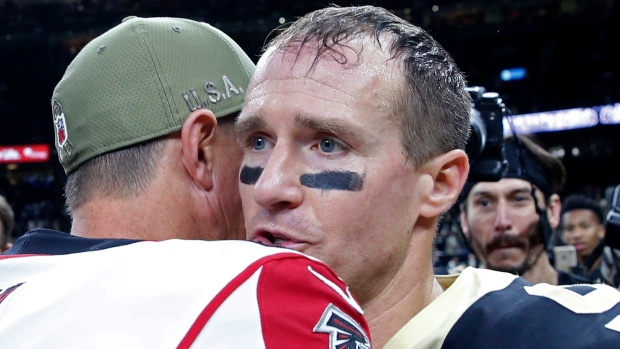 Some losses have greater consequences than others.

For the most part, it takes time for the bigger picture to develop in order for us to gain the perspective we need to understand the full impact of each result.

With nine weeks in the books, most football fans probably had a good idea of what they thought would happen in Week 10 of the NFL season.

Then again, anything can happen on any given Sunday.

Last week at this time, the New Orleans Saints seemed primed for a lopsided Week 10 win.

After all, the Saints were coming off a bye week at 7-1, with Drew Brees set to make his second start since returning from injury at home against an Atlanta Falcons team that appeared overmatched on paper at 1-7.

New Orleans was the biggest betting favourite on the board at -13.5.

None of that mattered when they took the field on Sunday.

The Falcons went into Mercedes-Benz Superdome and nearly matched the seven sacks they had produced up until that point in the season with six sacks on Brees.

Per ESPN Stats and Info, it was the first time in almost two decades that a 1-7 or worse team beat a 7-1 or better team.

Sure, it was just one loss for New Orleans.

Sure, they probably will bounce back.

At the same time, it’s a loss that could come back to haunt them in their quest to lock down the No. 1 seed in the NFC.

The Saints didn’t lose any ground on the first-place San Francisco 49ers, which lost an overtime thriller to the Seattle Seahawks on Monday Night Football.

However, they did fall a half-game back of the Green Bay Packers for the second seed after Aaron Rodgers and company improved to 8-2 with a 24-16 win over the Carolina Panthers.

Seattle also improved to 8-2 and is right there in the thick of the NFC race.

Only two of their final seven games will be against opponents with better than .500 records, including a showdown with the 49ers and two games against the Carolina Panthers.

Still, they just lost a very winnable game against the Falcons.

It’s impossible to overlook the implications that loss could have on their season.

Next up is a trip to Florida to visit the Tampa Bay Buccaneers this Sunday.

It’s another game that nobody expects the Saints to lose.

Meanwhile, with their MVP Patrick Mahomes back in time for a date with the Tennessee Titans, the Kansas City Chiefs appeared primed to bounce back from a miserable 2-3 stretch.

Instead, it was Ryan Tannehill who stole the spotlight in the final moments with a game-winning touchdown pass to Adam Humphries in a 35-32 Titans win.

The Chiefs nearly tied it in the dying seconds, but Harrison Butker’s fifth field goal attempt of the game was blocked to seal the loss.

For his part, Mahomes threw for 446 yards and three touchdowns.

However, he was just 2-of-5 on pass attempts that travelled more than 20 yards and Kansas City was forced to settle for four field goals.

The red zone struggles and missed opportunities on potential big plays were the difference in the loss.

As is the case with the Saints, we can’t predict the consequences of this result.

What we do know is that at 6-4, Kansas City now trails the New England Patriots, Baltimore Ravens and Houston Texans for the AFC’s top seed.

The Chiefs are also just one game up on the streaking Oakland Raiders for first place in the AFC West.

Nobody in Kansas City is pushing the panic button right now.

At the same time, a loss to the Titans could deal a significant blow to the Chiefs’ ability to clinch a bye and home field advantage in the AFC playoff race.

Next up for Kansas City, a trip to Mexico City to clash with the rival Los Angeles Chargers on Monday Night Football this week.

The Chiefs are the betting favourite to win that game as well.

We will know a little more about the direction Kansas City is headed in once that result is in the books.