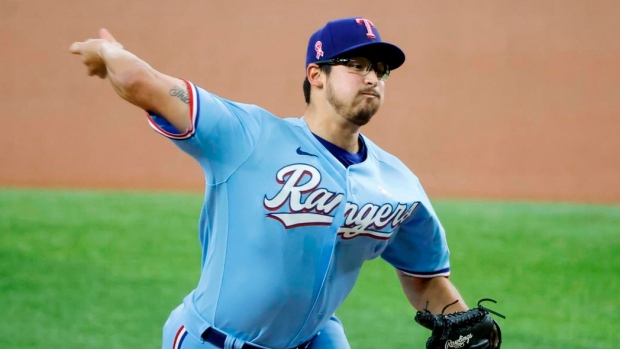 ARLINGTON, Texas — Adolis García hit his team-leading ninth homer and drove in a career-high five runs, Dane Dunning struck out 10 in five innings and the Texas Rangers beat the Seattle Mariners 10-2 on Sunday.

The past seven victories for the Rangers have come after falling behind, this time when they answered Seattle's two-run fifth for a 2-1 lead with six runs in the bottom of the inning.

Nick Solak had a tiebreaking, two-run double as the first six Texas hitters reached base, including Jose Trevino on shortstop J.P. Crawford's first error in 27 games, and third of the day for the Mariners.

Leadoff man Isiah Kiner-Falefa had three hits and scored three runs as Texas won its third consecutive series and improved to 7-2 since May 1 to get back to .500 for the first time since April 9.

The first of two RBI singles from García came after back-to-back errors from third baseman Kyle Seager and second baseman Dylan Moore in the third. The other gave the Rangers a 9-2 lead in the sixth and made the 28-year-old Cuban the first Texas rookie in seven years with five RBIs in a game.

“You’re starting to see the consistency,” manager Chris Woodward said. “The first base hit, the RBI single, was a 2-0 slider. Typically he could never come off the fastball. He works on these things every day. He knew spin was probably his Achilles' heel throughout his career and he works on it every day. Now it’s actually turned into his strength.”

The Mariners lost for the second time in six series-deciding games after winning the opener and losing 9-8 when the potential tying was thrown out at home to end the game.

“Not the way we wanted the series to play out after we got the win on Friday night,” Seattle manager Scott Servais said. “Texas is about as hot an offensive club as we’ve seen all year. That combined with we didn’t play good defence today.”

Dunning (2-2) left the mound trailing 2-1 after topping his previous career high of seven strikeouts while matching the most for a Texas pitcher at Globe Life Field, which opened last year. It was also a season high for the Rangers.

The 26-year-old right-hander making his 14th career appearance, all starts, allowed RBI singles to Mitch Haniger and Seager. Dunning's outing ended on a groundout by José Marmolejos two pitches after Marmolejos just missed a grand slam down the line in right.

“The sinker had a little bite to it, the slider had some bite to it,” Woodward said after Dunning threw a season-high 89 pitches. “He was getting some really weak swings. I kind of had a feeling we were going to extend him today. I wanted to.”

Charlie Culberson led off the Texas fifth with his third homer, Solak broke the 2-all tie with a liner down the line in left and Garcia capped the six-batter stretch with a shot into the Seattle bullpen in left-centre field off Justus Sheffield (2-3). The left-hander allowed seven runs — five earned — in five innings.

Mariners: RHP Ljay Newsome went on the 10-day injured list with right elbow inflammation, and RHP JT Chargois was promoted from Triple-A Tacoma. Newsome was 1-1 with a 7.98 ERA after being recalled from the alternate training site April 7. The 30-year-old Chargois, who pitched 1 1/3 scoreless innings, has 85 major league appearances over three seasons with Minnesota and the Los Angeles Dodgers. He pitched in Japan last year.

Rangers: RHP Kohei Arihara was placed on the 10-day IL with a bruised right middle finger, and OF Eli White was recalled from Triple-A Round Rock a day after being sent down. Arihara, in his first big league season since coming over from Japan, has allowed 16 earned runs in 8 1/3 innings over his past three starts. The move came a day after Seattle scored five runs in 3 2/3 innings against him. ... RHP Kyle Cody (right shoulder inflammation) was transferred to the 60-day IL to make room for C Jack Kruger, who was claimed off waivers from the Los Angeles Angels.

Rangers: RHP Kyle Gibson (3-0, 2.40 ERA) is scheduled to start the first of two interleague matchups in San Francisco on Monday. Gibson is in the top 10 in ERA among AL starters despite giving up five runs without making it out of the first inning in the shortest opening day start in franchise history.