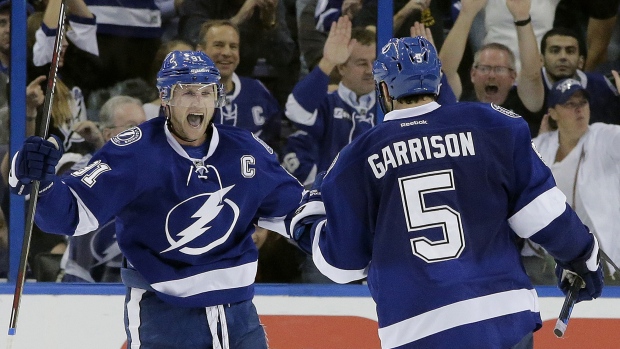 TAMPA, Fla. - Jason Garrison has two goals this season and both are game-winners.

Garrison scored the tiebreaking goal in the third period and the Tampa Bay Lightning beat the Washington Capitals 4-3 on Saturday night.

"It would be a nice habit to have, but I don't know many more I have left," said Garrison, who also had the winning goal in Thursday night's 4-3 victory over Philadelphia.

Tampa Bay, which also got goals from Ryan Callahan, Ondrej Palat and Nikita Kucherov, has won five of six. Tyler Johnson had two assists, giving him 13 over his last nine games. Ben Bishop made 35 saves, improving to 7-1-1 this season.

Marcus Johansson, Eric Fehr and Troy Brouwer scored for the Capitals, who have lost four of five. Alex Ovechkin had an assist to snap a five-game point drought, the longest of his career.

Steven Stamkos won a faceoff, sending the puck back to Garrison, who gave Tampa Bay a 4-3 lead 2:27 into the third.

After Palat scored at 9:29 of the second, Tampa Bay went up 3-2 when Kucherov tipped Eric Brewer's shot past Braden Holtby just 2:43 later.

"We've been chasing the last couple of games," Washington coach Barry Trotz said. "When you're chasing the game all the time, it becomes a daunting task. That's where the frustration comes in, too."

Brouwer pulled the Capitals even at 3 during a power play with 58.4 seconds remaining in the second.

Right after Kucherov hit the post, Fehr put the Capitals up 2-1 from just above the goal line at 2:11 of the second.

Callahan, back in the lineup after missing five games due to a lower-body injury, opened the scoring with a nifty redirection between his legs off Brian Boyle's pass 6:06 into the game.

Less than a minute after Holtby made in-close saves on Callahan and Valtteri Filppula during a Tampa Bay power play, Johansson tied it at 1 with 7:01 left in the first on a rebound after Bishop stopped a shot by a tripped-up Ovechkin.

Bishop made a nice save on Ovechkin with 2 minutes to play.

Lightning defenceman Radko Gudas and Washington forward Tom Wilson fought in the first after Fehr got a goalie interference penalty for skating into Bishop.

"I can't say enough about Radko sticking up for me," Bishop said. "I think he broke his nose. It means a lot. It brings the team together."

"I think we're giving up too many goals," he said. "I'm a big part of that. I think our team is very close to going on a run and going on to be one of the top teams in the league. I've just got to get a little better at my job to make sure I do my part."

NOTES: Stamkos (218) and Ovechkin (208) top the NHL in goals since the start of the 2009-10 season. ... Ovechkin has gone six games without a goal. He had six shots Saturday. ... Ovechkin has 37 assists and 72 points in 55 games against Tampa Bay. ... Tampa Bay C Alex Killorn left in the second with an upper-body injury. ... Washington C Brooks Laich (left shoulder) missed his fifth straight game. ... Lightning D Andrej Sustr (right hand), hurt in Thursday's game, didn't play. He was seen flexing the hand at times during the morning skate. ... Capitals LW Aaron Volpatti (neck) continues practicing with the team. ... Washington defencemen Matt Niskanen and Karl Alzner were both minus-3.