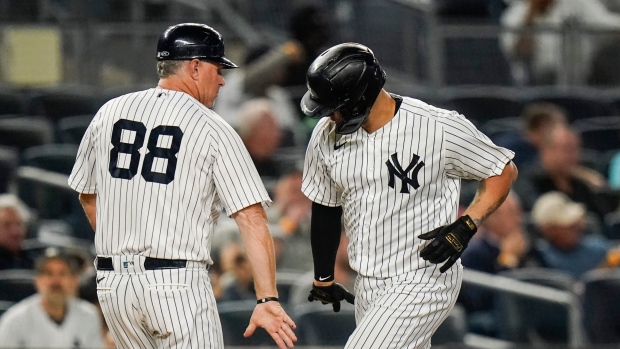 NEW YORK (AP) — Gary Sánchez rebounded from poor defensive play with a go-ahead home run, four pitchers combined for scoreless relief and the New York Yankees gained in the AL wild-card race with a 4-3 victory over the Texas Rangers on Monday night.

Sánchez put the Yankees ahead in the second inning against rookie A.J. Alexy (2-1) with his 22nd home run.

His play behind the plate contributed to three defeats during New York’s fall from playoff position: Sánchez failed to tag a runner against the Mets despite catching the throw in plenty of time, allowed a pair of ninth-inning wild pitches at Baltimore and missed a foul popup in a seven-run inning by Cleveland.

With a harvest moon rising above Yankee Stadium, New York built a 4-0 lead before the Rangers closed the gap in a three-run fifth against Nestor Cortes.

Chad Green (8-7) retired five straight batters, Clay Holmes and Joely Rodríguez combined for the seventh and eighth, and Aroldis Chapman got three straight outs for his 28th save in 32 chances.

New York moved within a half-game of Toronto for the second AL wild card and with 11 games left is two back of Boston, the league’s wild-card leader. The Yankees had lost 15 of 22 following a 13-game winning streak.

Run-scoring hits by Aaron Judge and Gleyber Torres around Giancarlo Stanton’s sacrifice fly built the lead in a three-run third. Alexy stranded the bases loaded by striking out Brett Gardner.

Alexy, making his third big league start, allowed four runs, four hits and six walks in 3 1/3 innings. The Rangers dropped to 55-95, on track for their first 100-loss season since 1973.

Yankees manager Aaron Boone defended Sánchez and credited him with improvement. “Sometimes because Gary is the lightning rod that he seems to be sometimes, a play or two really torpedoes some of that or changes that narrative, and that’s not necessarily fair,” Boone said. “I think it’s important to acknowledge the strides that he has made in every facet on the defensive side while also acknowledging a couple of big mistakes this week, without question.”

Joey Gallo went 0 for 3 with a walk after missing 1 1/2 games with a sore neck, returning to play for the first time against the team that traded him to the Yankees in July.

“It’s crazy. It’s weird being on the other side,” he said. “It brings a lot of emotion, a lot of memories.”

Gallo went to the Rangers’ locker room on the third-base side before batting practice.

“He came across enemy lines in our clubhouse and I got to see him in person, which was cool,” Rangers manager Chris Woodward said.