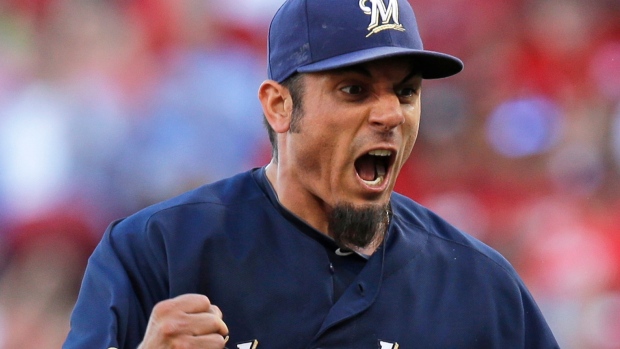 CINCINNATI - A little extra rest allowed Matt Garza to get a little more on his fastball.

Garza threw a two-hitter for his fourth career shutout, and the Milwaukee Brewers ended their four-game losing streak by beating the Cincinnati Reds 1-0 on Saturday night.

Despite a slump that matched their longest of the season, the Brewers maintain the best record in the league and a five-game lead over St. Louis in the NL Central.

"After losing four in a row, we needed a start like that," catcher Jonathan Lucroy said. "Obviously you don't want to create a losing streak. He was able to come in and stop it."

Garza (6-5) has been one of the Brewers' best starters lately, going 4-1 in his last seven games. He retired the first 12 batters in order before Brandon Phillips led off the fifth with a single for Cincinnati's first hit.

He allowed two hits, two walks and fanned nine while going the distance for the first time this season, throwing 111 pitches. It was his first shutout since 2010, when he threw Tampa Bay's first no-hitter for a 5-0 win over Detroit.

Garza had six days between starts and felt a little stronger. His fastball was consistently in the mid-90 mph range.

"I just kept attacking," Garza said. "I had a plan and I just stuck with it. We went after these guys, challenged them. Some days are better than others."

The Brewers signed Garza as a free agent to a four-year, $50 million deal in January. Manager Ron Roenicke hopes his shutout on Saturday is the start of a long stretch of quality performances.

"He's thrown the ball really well for the fourth, fifth game in a row," Roenicke said. "I'm hoping that this being the best of them will get him back in a groove where he reels off a couple of months of great ballgames."

It was Milwaukee's sixth shutout of the season. The Reds were blanked for the 10th time, including the third time in the last five games. Cincinnati has been shut out 1-0 at home three times this season, including opening day against St. Louis.

Aramis Ramirez singled home a run in the first inning off Homer Bailey (8-5), who gave up seven hits through eight innings. Two Brewers were thrown out at the plate.

Right fielder Ryan Braun struck out swinging in the first inning, and then left the game in the second with spasms in his lower back. Braun is batting .289 with 11 homers and a team-leading 49 RBIs. He missed 14 games in May with a strained oblique.

Roenicke said Braun had a stiff back during batting practice and it bothered him early in the game.

Milwaukee hasn't had much success in Cincinnati lately, dropping 11 of its last 16. The teams have split the first two games of the series, leaving the fourth-place Reds 7 games back. Milwaukee has been alone atop the division since April 9.

Lucroy doubled with two outs in the first and scored on Ramirez's single to left. Garza made the run stand up by matching his season high with eight innings. Zack Cozart doubled in the sixth inning, the only Red to reach second base.

The Reds kept it close by nailing a pair of Brewers at the plate.

Ramirez singled with two outs in the sixth and tried to score on Khris Davis' double to right, but shortstop Zack Cozart relayed the throw from Jay Bruce in time to get him sliding in. Mark Reynolds also tried to score from first base on Scooter Gennett's double to right in the seventh, but second baseman Brandon Phillips' relay from Bruce also was on target.

NOTES: LH Yovani Gallardo (5-5) starts the final game of the series against Mat Latos (1-1), who is making his fifth start since returning from the disabled list. ... Davis was back in left field after missing two games with a sore left shoulder. ... Reds manager Bryan Price said LHP David Holmberg could be promoted to start during a makeup doubleheader next Tuesday against the Cubs at Great American Ball Park. The Reds got Holmberg as part of a three-team deal that sent C Ryan Hanigan to Tampa Bay last December. ... Bruce failed to get a hit, extending the deepest slump of his career to 0 for 23. ... Price originally planned to start C Brayan Pena on Saturday, but gave him a day to rest some nagging injuries.