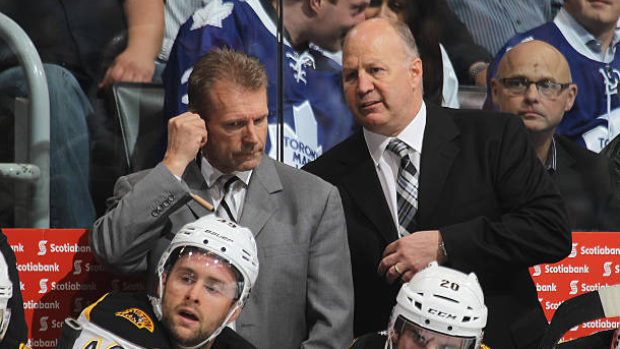 On the August 2020 night when Claude Julien had a frightening health incident that forced him to leave the NHL bubble in Toronto, he received many texts and calls from friends and family asking about his well-being.

One of those messages came from Calgary Flames head coach Geoff Ward, whom Julien had coached with for more than 10 years.

“In typical Claude fashion, like it was no big deal,” Ward said in an interview with TSN, recalling the incident.

The Montreal Canadiens head coach was admitted to a Toronto hospital with chest pains after the Aug. 12 Eastern Conference first-round series game against the Philadelphia Flyers. The following day, the 60-year-old had a stent placed in one of his coronary arteries.

The history between the two men is well documented.

They first met more than two decades ago, in 1997, when Hockey Canada brought Julien on as the head coach of its under-18 team. His assistant? A former high school teacher named Geoff Ward. While coaching future NHL stars Brad Richards and Vincent Lecavalier, the two hit it off. Four years later, Julien brought Ward with him to Hamilton to be his assistant with the AHL’s Bulldogs. The trend would continue when Julien was hired as the Bruins head coach in 2007, with Ward following suit as an assistant coach in Boston.

They won hundreds of games together, culminating in the 2011 Stanley Cup.

“He was a really, really good mentor to me. We had a real good time together.”

As quick as Ward is to acknowledge Julien’s role in his career, Canadiens bench boss is just as effusive in his praise of Ward.

“Geoff’s a really good coach,” the 60-year-old Julien said in a media session this week.

“He knows the game extremely well. Him being a head coach now is not surprising to me. He’s paid his dues. I’m not surprised how well he’s done. He had to take over a team halfway through the season last year and the team never missed a beat and did well. Deservingly, he was extended. Watching his team so far this season, they’ve done well.”

Beyond Julien, Ward forged his own path, winning Coach of the Year honours in both the American Hockey League (2003) and DEL in Germany (2015). The two men have stayed in touch over the years and during the season, Ward glances at how Julien’s teams are doing (and listens to his media Zoom sessions).

“Now that he’s gone to Montreal, you’re keeping tabs with what’s going on with him there and how the team’s doing,” Ward said.

“Obviously with the way the divisions are now, you’re paying attention to it a bit more, but I’m always watching to see how he’s doing and his press conferences, just to stay up to date.”

The two met twice last season when Ward was the Flames’ interim head coach, with Julien getting the better of him on both occasions. Now the full-time head coach, Ward, a father of four, isn’t taking anything for granted – especially during the COVID-19 pandemic and just months after his longtime friend had a health scare.

“Claude said many times that the health of your family is more important than hockey,” Ward said.

-After back-to-back wins against Vancouver, the Flames then lost two straight to the Toronto Maple Leafs, putting them out of the (early) playoff picture in the all-Canadian North Division. A big part of that is a lack of secondary scoring, and a shortage of even-strength scoring. Of the Flames’ 16 goals so far in 2020-21, 11 have come from Johnny Gaudreau, Sean Monahan, Elias Lindholm and Matthew Tkachuk. The team’s seven five-on-five goals is tied for the fourth-fewest in the league.

The Flames’ bottom-six forwards (Sam Bennett, Mikael Backlund, Josh Leivo, Milan Lucic, Derek Ryan and Joakim Nordstrom) in the lineup against the Leafs on Tuesday night have combined for just two goals so far this season.

-I’ll admit, I predicted Mangiapane would lead the team in scoring this year. The Toronto native was third on the team last season with 17 even-strength goals, despite starting most of his shifts in the defensive zone. So far he has yet to find the back of the net after filling in for the injured Dillon Dubé on a line with Tkachuk and Lindholm.

-Dubé’s absence from the lineup seems to have had an effect on the forward unit. The 22-year-old 2018 World Junior gold medal winner had a fine start to the season, with two points in three games while playing alongside Tkachuk and Lindholm and on the second power-play unit. He played just 3:55 against Vancouver, missed the team’s bye week practices, and is still listed day-to-day.

- While fans may think players are rather bored on road trips, apparently there is some entertainment. At least in Montreal, the Flames have a ping pong table, pool table, and video games. One of the common threads about this Calgary group is that the players are very close. As Ward said, those activities are important in terms of players socializing with one another.

-Three weeks ago, I wrote an article that named a few under-the-radar Calgary players who could have a big impact this season…thinking beyond the Gaudreaus and Giordanos of the world. Someone in the Flames organization reached out to say that I should have included blueliner Nikita Nesterov on that list. The Russian is paired with young Finn Juuso Valimaki and played fairly well so far. Captain Mark Giordano went out of his way to praise the duo as well.​