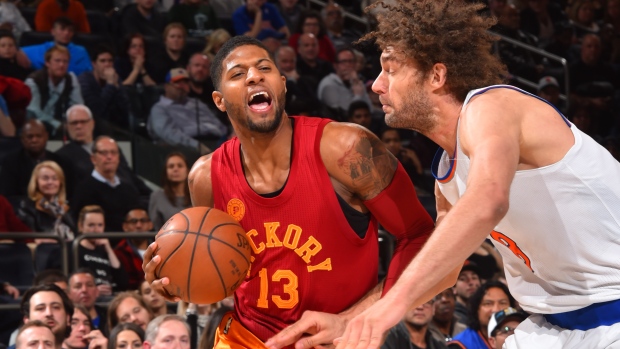 NEW YORK, N.Y. - Paul George's sore left ankle was getting worse, so he finally told his coach he needed to come out of the game.

He hoped it was for good, but just in case, he had another message.

"Don't rule me out," George told Frank Vogel. "So I just kept that in the back of his mind and late in the fourth he put me back in."

George then made the tiebreaking jumper with 23.6 seconds left, and the Indiana Pacers beat the New York Knicks 92-87 on Sunday night to tie for seventh place in the Eastern Conference.

The Pacers blew an 18-point lead in the second half against a Knicks team missing its two best scorers, but recovered to join Detroit at 41-36 and stay two games ahead of ninth-place Chicago.

George finished with 20 points and nine rebounds, returning to the game midway through the fourth quarter after the Pacers had said he was questionable to play further because of a sore left ankle.

He had scored 12 points in the third quarter before checking out late in the period with the Pacers leading by 13. George grabbed a heat pack and was icing on the bench, hoping his work was done, but Vogel had no choice but to return to his All-Star forward.

"Obviously, you want to step on a team's throat when you're up 18 and put them away. We failed to do that the last two nights but we got two Ws," Vogel said, referring to Saturday's victory in Philadelphia. "So we've got to continue to work on what we need to do to put a team away, but I'll be happy with the win."

Rodney Stuckey had 17 for Indiana, which got a big break when instant replay wiped out Afflalo's apparent 3-pointer that would've cut it to one with 14 seconds left. But officials determined that Afflalo was out of bounds when he caught the pass before launching his shot and restored the Pacers' 91-87 advantage.

A night after a fourth-quarter rally in Philadelphia, the Pacers appeared on their way to an easy victory when they went ahead 68-50 in the third quarter. But the Knicks cut the deficit in half by the end of the period, then came all the way back to go ahead 87-85 on Afflalo's free throws with 1:18 left.

"I really appreciate and admire how hard that they came out and played in the second half," Knicks interim coach Kurt Rambis said. "We really gave ourselves a great chance to win. If we would have played that way to start the ballgame and finished it off in the first half, we probably could have come away with the win."

Ian Mahinmi tied it with two free throws before George knocked in his jumper for an 89-87 edge. Vujacic missed a 3-pointer before Monta Ellis added two from the line for a four-point advantage.

Knicks: Rambis said he didn't anticipate forward Lance Thomas to return this season. Thomas hasn't played since March 5 because of a sprained ligament in his left knee. ... The Knicks fell to 0-19 when scoring fewer than 90.

Porzingis said before the game his shoulder is improving and he hopes to play again this season, though he understands it will be the team's decision. He's not really close yet, as he can now lift his arm high but hasn't done any shooting.

"I'm young and I always want to be on the floor, but at the same time I know I have to be smart about this," he said. "There's nothing really that I'm going to achieve by going out there for the last few games, but I think I'll be back for the last two, three games hopefully."